He led the party campai­gn agains­t Modi's BJP but manage­d only 52 seats
By AFP
Published: May 25, 2019
Tweet Email 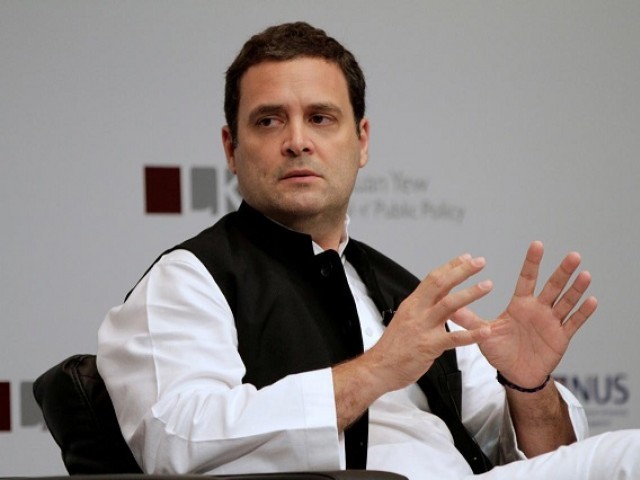 NEW DELHI: Indian opposition leader Rahul Gandhi, scion of the Nehru-Gandhi dynasty, offered to resign Saturday after his Congress party was trounced in a second straight national election but the gesture was rejected, party officials said.

While Prime Minister Narendra Modi triumphantly accepted pledges of allegiance from members of allied parties after his second landslide win, Congress leaders licked their wounds at a special meeting in New Delhi.

“Party President Rahul Gandhi offered his resignation but it was unanimously rejected by the members of Congress Working Commission,” Randeep Surjewala, a party spokesperson, told reporters.

Gandhi led the party campaign against Modi’s Hindu nationalist Bharatiya Janata Party (BJP) but managed only 52 seats, barely more than the historic low of 44 in the 2014 election.

The BJP increased its majority, taking 303 of the 543 elected seats announced Friday, up from 282.

“In a democracy wins and losses keep happening but providing leadership is a different matter. He gave leadership,” senior Congress member Ghulam Nabi Azad told reporters after the meeting.

Gandhi led the Congress campaign in the 2014 defeat before taking over from his mother as party president in 2017.

The 48-year-old lost his constituency in Amethi, Uttar Pradesh that has been a family bastion for decades. He was allowed to contest a second seat however and won in southern India.

Experts outside Congress have strongly criticised his display against Modi, who mocked the opposition leader as a spoiled member of the family dynasty that has dominated Indian politics since independence in 1947, providing three prime ministers.

Modi was unanimously elected head of his BJP-led alliance in a special ceremonial meeting at parliament. He is to be sworn in for a new term this week.

Paramilitary forces boosted security on Saturday because of the violence.

The BJP said a 23-year-old party worker was shot dead by Trinamool activists late Friday at Chakda, north of the regional capital Kolkata. The rival party denied any involvement.

The man’s family said he was shot in a field near his home.

Clashes between BJP and Trinamool activists were also reported in three other districts.