IMF hopes the deal can create fiscal space for a substa­ntial increa­se in social spendi­ng
By News Desk
Published: May 24, 2019
Tweet Email 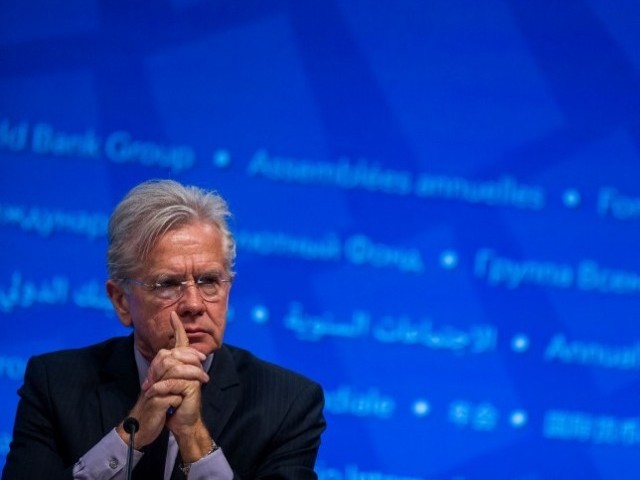 A senior official of the International Monetary Fund (IMF) on Thursday said that the bailout package given to Islamabad is aimed at improving Pakistan’s public financing and reducing public debt.

“There have been major developments recently, in fact since I was last standing here we have had an agreement at staff level,” said IMF’s Director Communications Gerry Rice while addressing a press briefing.

The IMF official briefed the journalists on the May 12 programme that includes a $6 billion package with a three-year extended fund facility by the IMF “to support Pakistan’s economic reforms efforts”.

“Just prior to the [bailout package] Managing Director Christine Lagarde met with PM Imran Khan,” he said. “Ernesto Ramirez-Rigo is the mission chief and he issued a comprehensive statement I would refer you to that and I won’t get into the details.”

The director communication, however, went on to elaborate on the deal by adding that it was aimed at helping “Pakistan get back on the path to sustainable and more inclusive growth and so on”.

“We hope that the programme can also create fiscal space for a substantial increase in social spending to strengthen social protection as well as infrastructure and other human capital development.”

An IMF mission led by Ramirez-Rigo visited Islamabad from April 29 to May 11 to discuss IMF support for the government’s economic reform programme. The visit was originally scheduled to end on May 10, however, Rigo stayed in Pakistan for one more day to conclude the deal.

The $6 billion deal between IMF and Pakistan

According to an IMF press release, the Pakistani authorities and IMF team reached a “staff level agreement on economic policies that could be supported by a 39-month Extended Fund Arrangement (EFF) for about US$6 billion.”

“Pakistan is facing a challenging economic environment, with lacklustre growth, elevated inflation, high indebtedness, and a weak external position,” the IMF noted in its statement. “This reflects the legacy of uneven and procyclical economic policies in recent years aiming to boost growth, but at the expense of rising vulnerabilities and lingering structural and institutional weaknesses.”

“Decisive policies and reforms, together with significant external financing are necessary to reduce vulnerabilities faster, increase confidence, and put the economy back on a sustainable growth path, with stronger private sector activity and job creation,” the IMF asserted.

The IMF programme will also impact the upcoming budget. “The forthcoming budget for FY2019/20 is a first critical step in the authorities’ fiscal strategy. The budget will aim for a primary deficit of 0.6 per cent of GDP supported by tax policy revenue mobilization measures to eliminate exemptions, curtail special treatments, and improve tax administration,” said IMF. “This will be accompanied by prudent spending growth aimed at preserving essential development spending, scaling up the Benazir Income Support Program and improve targeted subsidies, with the goal of protecting the most vulnerable segments of society.”

The statement added that reducing inflation will be the Sate Bank of Pakistan’s focus. On the weakening rupee, IMF advised: “a market-determined exchange rate will help the functioning of the financial sector and contribute to better resource allocation in the economy.”

“To improve fiscal management the authorities will engage provincial governments on exploring options to rebalance current arrangements in the context of the forthcoming National Financial Commission,” it concluded.

Current state of the economy

While announcing the IMF programme, Advisor to the PM on Finance Dr Abdul Hafeez Shaikh noted that Pakistan’s foreign loans had exceeded $90 billion while exports registered a negative growth over the past five years.

“The trade deficit reached $20 billion and our foreign exchange reserves dipped by 50 per cent in the past two years. So we have a $12 billion gap in our annual payments and we don’t have capacity to pay them,” he added.

Apart from the IMF bailout, Shaikh said, Pakistan will also receive $2 to $3 billion from the World Bank and Asian Development Bank in next three years.

Meanwhile, the country’s budget deficit hit an 11-year high at Rs1.92 trillion, or 5% of the size of the national economy, for the nine-month period ended March 2019 due to continued double-digit growth in defence and debt spending, and sinking revenues.

From July through March FY19, the gap between expenditures and revenues was recorded at Rs1.922 trillion or 5% of gross domestic product (GDP), according to the fiscal operations summary released by the Ministry of Finance.

The nearly Rs2-trillion deficit for July-March of the current fiscal year was about Rs300 billion higher than the Ministry of Finance’s initial estimates.