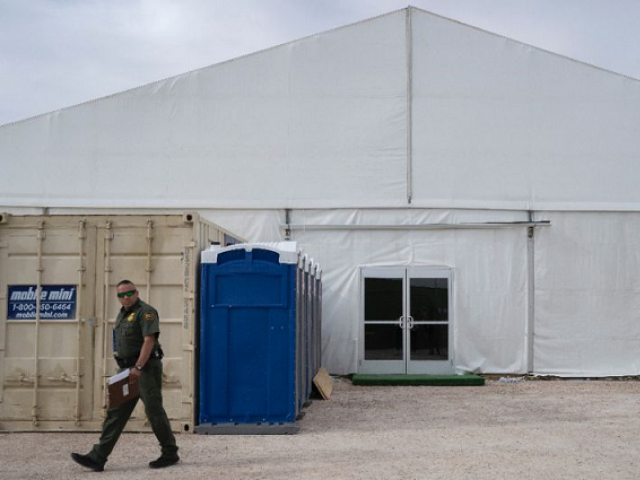 A US Border Patrol agent walks by a new temporary holding facility opened by Customs and Border Protection personnel on the US-Mexico border in El Paso, Texas. PHOTO: AFP

WASHINGTON: The American military is going to set up tents near the US-Mexico border to temporarily house adult undocumented migrants held by immigration authorities, the Pentagon said on Wednesday.

Military personnel will erect the tents, but the Department of Homeland Security (DHS) will run the camps, a statement by Pentagon spokesperson Major Chris Miller said.

Trump to build Mexico border wall with funds meant for Pakistan, others

Acting Secretary of Defense Patrick Shanahan approved a DHS request to lend the tents and help “construct temporary facilities to house and care for a minimum of 7,500 total single adult male and female aliens,” Miller said.

These migrants will have been processed by Customs and Border Protection agents, “and turned over to Immigration and Customs Enforcement/Enforcement Removal Operations custody.”

Military personnel “will conduct site assessments over the next two weeks to determine the scope, cost, and timeline” to erect the tents, Miller said.

The temporary housing sites are set to open in Tucson and Yuma, Arizona, and at four locations in Texas: Tornillo, Donna, Laredo, and Del Rio.

Mexico ‘concerned’ by delays at US border crossing points

Most of these people are undocumented migrants from Central America seeking asylum in the United States.

Many migrants are released pending a court hearing on their asylum applications because there is not enough room at the detention sites.