Presid­ent Donald Trump was to blame for the failur­e to reach an agreem­ent: Cui Tianka­i
By AFP
Published: May 22, 2019
Tweet Email 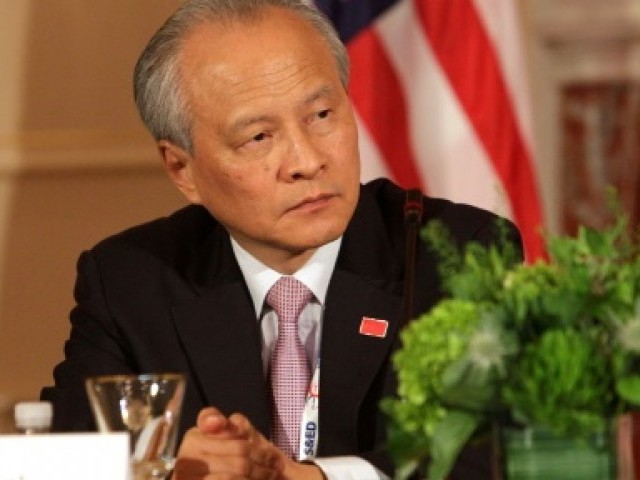 Chinese Ambassador to the US Cui Tiankai. PHOTO: AFP

WASHINGTON DC: China’s ambassador to the United States said in a Tuesday interview with Fox News that Washington repeatedly “changed its mind overnight” and sunk deals that could have ended the two countries’ trade war.

Ambassador Cui Tiankai also slammed as “politically motivated” the White House’s move to ban the transfer or sale of US technology to Chinese telcom giant Huawei.

“We are very worried. Such actions will really undermine people’s confidence in the normal function of the market,” Tiankai told Fox.

Washington has long suspected deep links between Huawei and the Chinese military, and its moves against the company came amid the churning trade dispute.

After a six month ceasefire, the standoff erupted anew on May 10 when the United States increased punitive duties on $200 billion in Chinese imports after talks in Washington collapsed.

Beijing followed suit three days later, saying it would raise tariffs on $60 billion in US exports starting on June 1.

In the interview, Tiankai said the administration of President Donald Trump was to blame for the failure to reach an agreement.

“If you review the process of trade talks between us over the last year or so, it’s quite clear it is the US side that more than once changed its mind overnight and broke the tentative deal already reached,” Tiankai said.

“China remains ready to continue our talks with our American colleagues to reach a conclusion. Our door is still open,” he added.

US officials this week however issued a 90-day reprieve on the ban on dealing with Huawei, saying breathing space is needed to a avoid huge disruption.