US stance on Iran 'deterrence, not about war': Pentagon chief

US stance on Iran 'deterrence, not about war': Pentagon chief

I believ­e that a war with Iran would be an absolu­te disast­er, far worse than the war with Iraq: Bernie Sander­s
By AFP
Published: May 22, 2019
Tweet Email 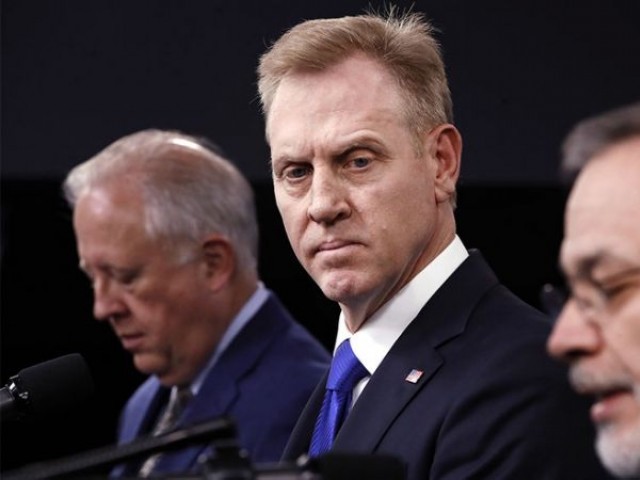 WASHINGTON: The US defense chief said President Donald Trump’s administration was seeking to deter Iran but not start a war, after he briefed members of Congress.

“This is about deterrence, not about war. We are not about going to war,” Acting Defense Secretary Patrick Shanahan told reporters after exiting the closed-door meeting with Secretary of State Mike Pompeo.

Shanahan credited robust US moves in recent weeks, which included the deployment of an aircraft carrier strike group, with thwarting Iranian threats.

“We have deterred attacks based on reposturing of assets, deterred attacks against American forces,” Shanahan said. “Our biggest focus at this point is to prevent Iranian miscalculation. We do not want the situation to escalate.”

US to respond with ‘great force’ if Iran attacks interests: Trump

Pompeo said that he and Shanahan placed Iranian actions within the context of “40 years of terrorist activity,” since the 1979 Islamic revolution replaced the pro-Western shah with a staunchly anti-US clerical regime.

The briefing did not satisfy many of the Democrats, who say that the heightened tensions are the results of President Donald Trump administration’s aggressive stance and shunning of diplomacy.

“I worry very much that, intentionally or unintentionally, we can create a situation in which a war will take place,” Senator Bernie Sanders, an independent running for the Democratic presidential nomination, told reporters.

Saying that the Iraq and Vietnam wars were based on lies by previous administrations, Sanders said: “I believe that a war with Iran would be an absolute disaster, far worse than the war with Iraq.”