Steel produc­er has sought £30 millio­n in loan from the govt
By Reuters
Published: May 21, 2019
Tweet Email 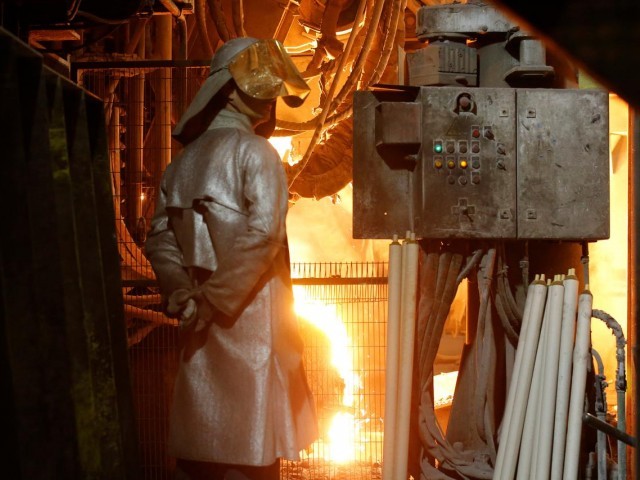 Steel producer has sought £30 million in loan from the govt. PHOTO: REUTERS

LONDON: British Steel, the country’s second largest steel producer, is on the brink of collapse unless the government agrees to provide an emergency £30 million ($38 million) in loan later on Tuesday, two sources close to the situation said.

Owned by investment firm Greybull Capital, British Steel employs around 5,000 people, mostly in Scunthorpe, in the north of England, while 20,000 more depend on its supply chain.

Greybull, which specialises in trying to turn around distressed businesses, paid former owners Tata Steel a nominal one pound in 2016 for the loss-making company which they renamed British Steel.

British Steel had asked the government for a £75-million loan but has since reduced its demand to £30 million after Greybull agreed to put up more money, according to one of the sources, who is close to the negotiations.

Greybull was also the owner of Monarch, an airline that went bust in October 2017.

If the British Steel loan is not approved by Tuesday afternoon, administrators EY could be appointed as early as Wednesday, the source said.

“There have been ongoing discussions with the company and I am sure the House (of Commons) will understand that we cannot comment at this stage,” Andrew Stephenson, a junior business minister, told lawmakers in parliament. “I can, however, assure the House that, subject to strict legal bounds, the government will leave no stone unturned in its support for the industry.”

Stephenson said the government had been in contact with former British Steel owners Tata Steel.

The second source said British Steel lost the backing of one of its four big lenders earlier on Tuesday, while some of the others had already exited.

“The (company’s) cash was not big enough to sustain even one bank pulling the plug,” he said.

The possible collapse of British Steel comes after Germany’s Thyssenkrupp and India’s Tata Steel ditched a plan earlier this month to merge their European steel assets to create the EU’s second largest steelmaker after ArcelorMittal.