The suspec­t was arrest­ed during a raid at his hideou­t in Bhatti Gate
By Our Correspondent
Published: May 21, 2019
Tweet Email 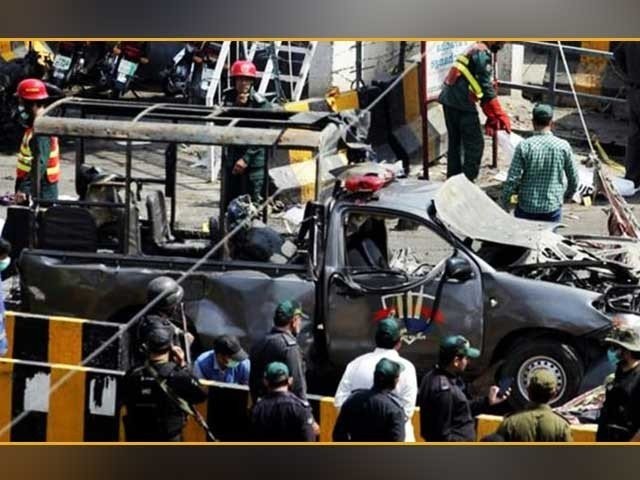 LAHORE  : The Counter Terrorism Department (CTD), in an intelligence-based operation (IBO) on Monday night, claimed to have arrested a suspected facilitator of the Data Darbar suicide blast.

The arrested suspect was identified as Mohsin Khan, a resident of Shabqadar in Charsadda district. The suspect was arrested during a raid at his hideout in Bhatti Gate. The CTD also claimed to have recovered explosives from his possession.

Meanwhile, the identity of the suspected suicide bomber was also released by police. He has been identified as Sadiqullah Mohmand. The alleged bomber was an Afghan national and entered Pakistan with a visa through Torkham crossing on May 6, claimed CTD.

On the Pakistani side, he was received by his handler Tayyabullah alias Raaki, a resident of Mohmand Agency.

Raaki brought him to Lahore and both stayed with Mohsin on the night of May 7 in a rented room in Mohallah Jalotian inside Bhaati Gate. The room had been rented out by another person identified as Noor Zaib in which Mohsin was living.

A spokesperson for the CTD said the arrested facilitator Mohsin Khan was radicalised by the handler a few years back. Khan disclosed that Raaki had told him to keep explosives as he would come back for another attack.

The initial investigation revealed that they (suicide bomber and his handler) were carrying two casings of electronic MP3 players used as detonators for a suicide belt and the other for explosives. The suicide belt was used in the attack and explosives were kept for future terrorist attacks. These explosives were recovered last night during the raid.

The spokesman added that a massive manhunt was underway to arrest Raaki. More important disclosures are expected from the arrested facilitator regarding the network of terrorist organisation Hizbul Ahrar.

Data Darbar blast claimed at least 13 lives and several people suffered injuries. Earlier, a man identified through CCTV footage and believed to be a suspect in the Data Darbar attack has claimed innocence and told investigators that he was visiting the shrine for prayers.

The images circled out from surveillance footage and flashed on TV channels showed two men who were believed to be associates of the suicide bomber who attacked the shrine in Lahore on May 8. One of them was seen around Data Darbar several times.

He was last seen near the shrine three hours before the attack.

Denying allegations, the man released a video on social media maintaining innocence. He explained that he was a resident of Aimanabad in Gujranwala and was at the shrine to offer prayers. “I panicked at the time of the attack,” he said.

The man called out TV channels for flashing his photo and accusing him of terrorism without evidence.

Meanwhile, the Counter-Terrorism Department has also directed the media to not run news about the investigation without prior confirmation from the authorities.

A CTD spokesperson said the department had not issued any press release about suspects in the shrine attack.

“The CCTV footage has been obtained by the media itself,” he added. “The investigation of such cases is a lengthy and strenuous process and that’s why the media should refrain from complicating the matter.