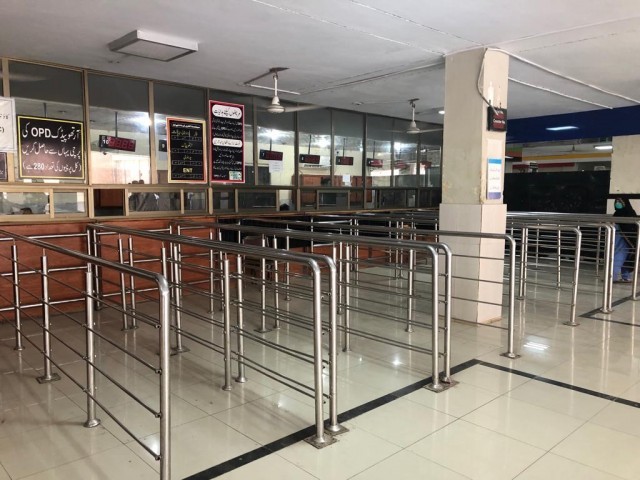 PESHAWAR: Patients continued to suffer at government-run hospitals in Peshawar where the outpatient departments functioned only partially at two of the three tertiary care hospitals in the provincial capital. The doctors and the provincial government though, are due for a showdown meeting on Tuesday (today) to air concerns and talk out differences.

Doctor aligned with the Young Doctors Association (YDA) and the Khyber-Pakhtunkhwa Doctors’ Council (K-PDC) continued their strike against the alleged high-handedness of the provincial health minister for the seventh day on Monday. All medical activities at the outpatient department (OPD) of the Khyber Teaching Hospital (KTH) remained closed though they were only partially open for some time at the Lady Reading Hospital (LRH) and at the Hayatabad Medical Complex (HMC).

LRH media spokesperson Muhammad Asim told The Express Tribune that doctors diagnosed over 2,000 patients there. At the HMC, he claimed that this figure had crossed 3,000.

However, when it was pointed out that independent sources considered the figures to include the patients coming to the emergency wards as well, Asim insisted that the figures were purely from the OPDs.

After doctors refused to hold a meeting with any government member less than the chief minister himself, a meeting between the K-PDC and the government is expected to be held at the Chief Minister House in Peshawar on Tuesday (today) to end the strike.

Senior doctors told The Express Tribune that they will chart a future course of action after their meeting with K-P Chief Minister Mahmood Khan.

Provincial Information Minister Shaukat Ali Yousafzai told The Express Tribune that CM Mahmood had invited representatives of the doctors’ council to the meeting with an open mind and with the idea of resolving the issue.

“We, the provincial government, want to end the problems faced by the public at government-run hospitals across the province,” Yousafzai said, adding that they were willing to “accept all the legal demands of the doctors’ council”.

“We will review their demands and desire to resume provision of healthcare facilities to the public as soon as possible,” Yousafzai added.

The information further hoped to hold a joint news conference with the doctors after the end of the negotiations.

Meanwhile, the All Health Employees’ Coordination Council (AHECC) has announced their unconditional support for the ongoing doctors’ boycott, noting that they stand shoulder-to-shoulder with their fellow colleagues of the health department.

Addressing a news conference here at the Peshawar Press Club, the AHECC representative and District Nursing Council head Mariam Ambareen told the media that they were supporting the K-PDC in their hour of need.

In the event that talks fail, the government has prepared a contingency plan to deal with the situation. In this regard, the government is mulling the imposition of Section 144 of the Pakistan Penal Code (PPC) in the three large hospitals of Peshawar to prevent doctors from agitating in hospitals, a source in the health ministry told The Express Tribune.

Meanwhile, YDA-K-P President Dr Rizwan Kundi told The Express Tribune that the government failed to resume services at the OPDs and reopen hospitals despite deploying a large number of police personnel and armoured personnel vehicles (APC) outside health facilities.

“A few doctors of the Pakistan Tehreek-e-Insaf (PTI) led government have been using social media to disseminate their false propaganda, while no services would be provided to patients across the province until the highhandedness of the [health] minister [Dr Hisham Inamullah Khan] is reported in an FIR and he is removed from the provincial cabinet,” Dr Kundi said.