Whatev­er the spin we may give it, some realit­ies are more real than the others­
By Hussain Nadim
Published: May 21, 2019
Tweet Email 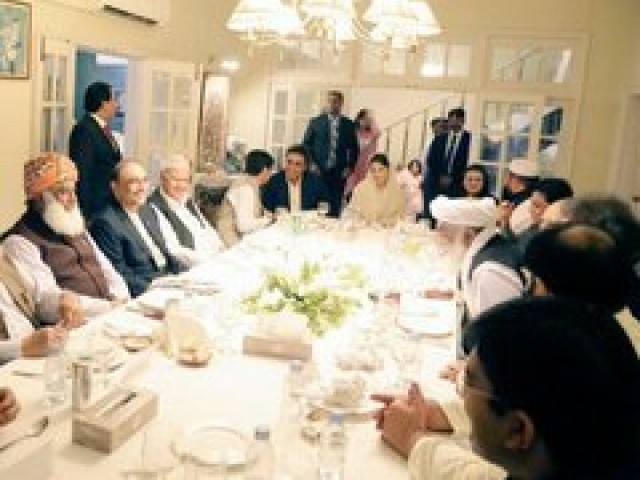 A picture can be more meaningful than a thousand words, for it can have more than one meaning. As much as the picture of Bilawal and Maryam together on the Iftar table is being marked by their supporters and paid bots as the new era in the Pakistani politics, it equally represents more of the tried and tested past and glim picture of the future. Whatever the spin we may give it, some realities are more real than the others.

To begin with, the timing and context of this meeting is almost entirely out of desperation, not out of some grand ideas of public welfare or democracy. You can spend millions on social media to run trends, or spend many more millions buying bots, bloggers, and opinion makers to make a hero out of Nawaz Sharif for not ‘bending the knee’, the fact is he was down on both knees requesting an extension in bail and permission to leave for abroad. That is not an interpretation, it is a recorded fact. A captain that abandons his ship is no captain at all, but we can sell whatever propaganda as long as there are takers.

It is not about democracy, inflation or the people. Those that live in palaces don’t feel inflation, they read about it in newspapers. It is personal, with Maryam out to save her father through whatever means possible. That whatever means has brought her to an unlikely place on the table with Bilawal who has his own compulsions to save his family. The Zardari family is next in line to face hardship, and there is more on them than the Sharif family. In times of great difficulty, the two political dynasties have taken great leaps to come to terms with each other against a common enemy: time. This is because time changes everything, and time is not on their side for this time at least.

Second, having Mohsin Dawar on the table gives away not only the level of desperation of the two political dynasties but also what the Iftar party was really about. This is not a campaign against the PTI, inflation or even the establishment. If anything, this is pleading for a deal to the establishment using the PTM card. On his part, Dawar by being part of this table has politicised the PTM and done more damage to the movement than anyone else could ever do.

Third, as much as some overzealous supporters are giving it a gender angle or a youth angle, the only thing that the picture represents is political dynasties holding strongly the civilian democracy under their control. Beyond the token presence of Shahid Khaqan Abbasi and a few others for optics, the only ones mattered were Bilawal, Zardari, Maryam, and Hamza.

What we need to recognise is that this is not a problem of civil-military divide or whatever term is attributed to it. This problem is that of the praetorian oligarchy that has a monopoly on resources and is infighting for the throne. This praetorian oligarchy is a strange mix of political dynasties, establishment and bureaucracy that contest each other for power within the status quo. The common people in this power struggle are mute bystanders and victims. This is why in Pakistan, as much as people have suffered under the military dictatorships, the suffering under civilian rulers have been equally on a par.

Yet, somehow the people are expected to believe that Bhuttos and Sharifs will be standing up for their rights becoming their voices. Truth is, this is not for the people, and it never was. This is and will always be about those in power and those wanting to be in power. Don’t let the paid bots tell you otherwise.