Dr Quresh­i says Eidul Fitr may be celebr­ated across Pakist­an on the same day
By Safdar Rizvi
Published: May 19, 2019
Tweet Email 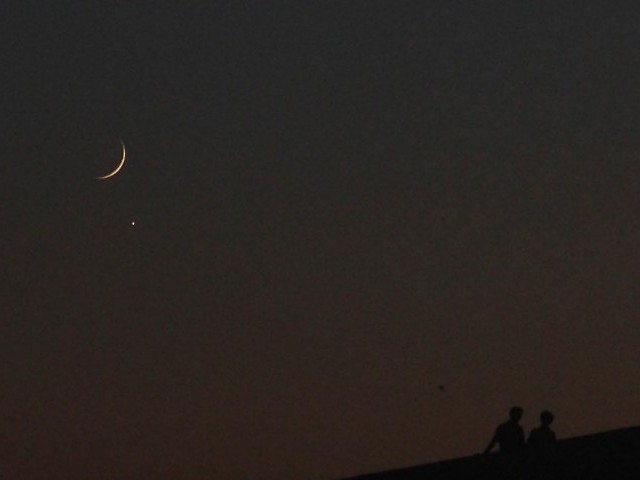 According to Prof Dr Shahid Qureshi, renowned astrophysicist and former director of Karachi University’s Institute of Space and Planetary Astrophysics, the moon for the month of Shawwal will emerge on the 28th day of the lunar calendar – on Monday, June 3 at 3:02pm.

According to Dr Qureshi, the new moon will only be four hours and 16 minutes old during the dusk of June 3 (28th of Ramazan) and will disappear from the horizon within a minute of the sunset.

In Peshawar, the age of the new moon will be four hours and 19 minutes at the time of sunset on June 3. The moon in Peshawar will dim out two minutes and 16 seconds prior to sunset and would be below the horizon at dusk.

Under such conditions, it is impossible to see the moon.

It is important to note that if the sighting of the moon is to be observed and confirmed on a scientific basis, then it should be witnessed after the sunset when the moon will appear several degrees above the horizon.

On June 4 or the 29th of Ramazan, the age of the new moon at the time of sunset will be 28 hours and 16 minutes and the moon could be seen on the horizon for about an hour after the sunset.

Therefore, all areas of Pakistan, including Peshawar, would be able to see the moon on June 4 as it will appear on the horizon before the sunset and will remain on the sky after the dusk for an hour.

According to the scientific calculation of the moon’s phases, the first of Shawwal will fall on June 5, a day after the 29th of Ramazan.

Speaking to The Express Tribune, Dr Qureshi said astrophysicists classify the universe into three regions – A, B and C – to observe the moon on its 29th day and subsequently determine the change of month in the lunar calendar.

When the moon is in region A during its orbit around the Earth, the chances of moon sighting in places falling under that region are 100 per cent, while in the second region, the moon may or may not be sighted.

In the third region – on the 29th day of the lunar calendar – the moon cannot be seen under any circumstances.

Since Pakistan will be classified in the first region on 29th of Ramazan this year, there are very high chances of seeing the moon. Last month, on the 29th of Shaban (May 5), Pakistan fell under the third region, therefore, there was no chance of moon sighting anywhere.

“The moon will be thin and blurred if it is quite close to the sun a few hours after its appearance. Therefore, it would be difficult to confirm the sighting due to the excessive light from the sun,” Dr Qureshi explained.

“However, if the moon is remarkably bright, thick or large in size and adequately far from the sun, then there are high chances of moon sighting.”

He added that the appearance of the new moon is the moment when the sun and the moon are so positioned in the sky that they are equidistant from the East and the West.

The moon assumes a position where it directly faces the sun.