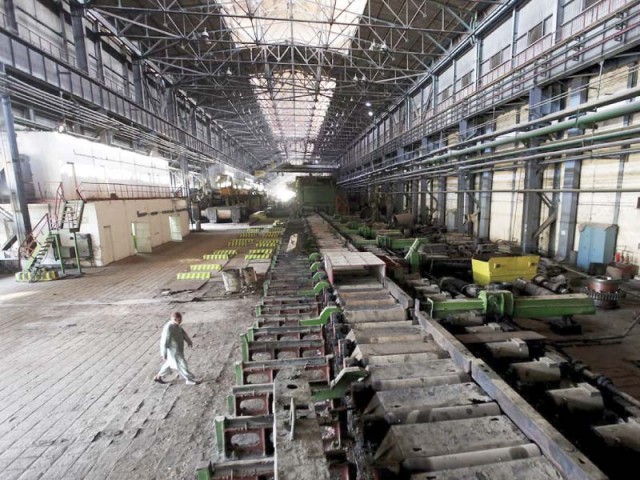 The Ministry of Industries and Production told the ECC that Russian and Chinese companies were interested in running PSM, but the major challenge was the mill’s huge outstanding liabilities. PHOTO: FILE

ISLAMABAD: The Sindh government has scuppered a plan of the Pakistan Tehreek-e-Insaf (PTI) administration in the centre to revive the financially troubled and closed Pakistan Steel Mills (PSM) by resisting the sale of its land for settling liabilities.

An expert group, formed by the current PTI government and tasked with suggesting ways for reviving PSM, in its report recommended that land assets available with the steel mill could be utilised to settle outstanding liabilities worth Rs206 billion.

It suggested that the land should be sold for industrial purposes which would give a boost to job creation, adding that a detailed review of the applicable regulations should also be undertaken by the government.

However, according to officials, owing to some observations of the Sindh government, the suggested option was found unviable.

Experts suggested that available land of PSM other than the land on which the mill had been built may be utilised for establishing steel-related industrial units for revenue generation. The Ministry of Industries and Production, in a meeting, told the Economic Coordination Committee (ECC) that Russian and Chinese companies were interested in running PSM, but the major challenge was the mill’s huge outstanding liabilities. After detailed deliberations, the ECC agreed to place PSM on the privatisation list and directed the Privatisation Division to initiate due process for the mill’s sell-off.

The ECC also decided that implementation of a revival plan based on private-sector input may be initiated and a report be submitted to the Cabinet Committee on Privatisation within six months for its consideration. The hiring of a transactional adviser and evaluation of foreign investors expressing interest in the steel mill would be the responsibility of the Privatisation Division, it said.

In their report, the experts said in order to make PSM operations profitable and sustainable, the current organisational structure – manpower and non-core departments – had to be rationalised and aligned with international best practices.

The expert group was of the view that PSM should not be privatised and shut down as it is a strategic asset of national interest.

It emphasised that the revival of PSM was technically possible through a phase-wise approach targeting first the downstream hot-rolled coil/cold-rolled coil (HRC/CRC) operations with a parallel revamp and retrofitting of upstream equipment. This would help in restoring the 1.1-million-ton-per-annum production capacity of the mill, followed by its expansion to 3 million tons, it said. The experts recommended the exploitation of domestic iron ore and coal reserves for their consumption in PSM by offering supportive fiscal incentives and a regulatory package to mining companies.

They said the government should establish public-private partnership in a bid to stimulate the necessary capital investment and obtain the requisite technical expertise for the successful revival, expansion and subsequent sustainable operations of PSM. It recommended the hiring of a transaction advisory consortium for selecting the preferred bidder and implementation of the liability settlement plan. The Ministry of Industries had proposed two options to the ECC – putting PSM on the privatisation list and hiring a transaction adviser for bid selection.