Its energy minist­er says global oil stocks are still rising, partic­ularly from the US
By Reuters
Published: May 18, 2019
Tweet Email 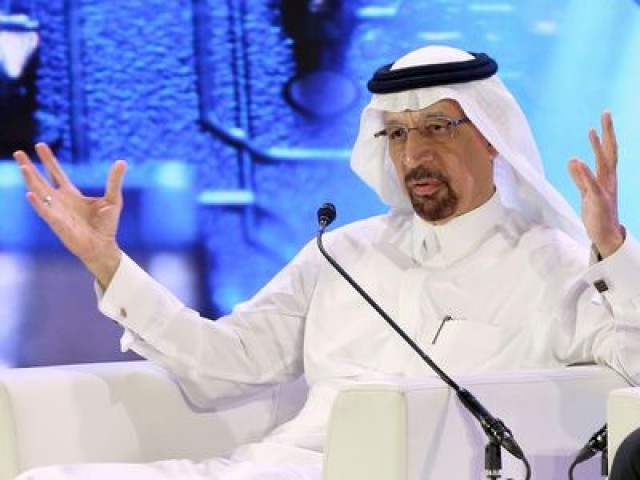 Its energy minister says global oil stocks are still rising, particularly from the US. PHOTO: REUTERS

JEDDAH: Saudi Arabia’s Energy Minister Khalid al-Falih said on Saturday that he saw no oil supply shortage as global oil inventories are still rising, particularly from the United States, but OPEC will be responsive to the oil market’s needs.

Speaking in Jeddah ahead of a ministerial panel gathering on Sunday of top OPEC and non-OPEC producers, including Saudi Arabia and Russia, Falih told Reuters OPEC will not decide on output until late June when the group is due to meet next.

“I am not sure there is a supply shortage, but we will look at the (market) analysis. We will definitely be responsive and the market will be supplied,” Falih said, when asked whether an increase in output was on the table due to oil shortage concerns.

“But all indications are that inventories are still rising. We saw the data from the US week after week, and there are massive increases, so there is obviously supply abundance.”

The Organisation of the Petroleum Exporting Countries (OPEC), Russia and other non-OPEC producers, known as OPEC+, agreed to reduce output by 1.2 million barrels per day (bpd) from January 1 for six months, a deal designed to stop inventories building up and weakening prices.

“We will be flexible. We are going to do the right thing as we always do,” Falih said of any decision at the meeting in June on continuing the reductions.

Falih said OPEC was guided by two main principles – “one to keep the market in its direction towards balancing, and inventories (are) back to normal level. And two to be responsive to market needs. We will strike the right balance I am sure.”

Saudi Arabia does not see a need to quickly boost production now with oil prices around the $70 a barrel level, as it fears a crash in prices and a build-up in inventories, OPEC sources said. But Russia wants to increase supply after June when the current OPEC+ pact is due to expire, the sources said.

The United States, on the other hand, which is not a member of the OPEC+ but is a close ally of Saudi Arabia, wants the group to boost output to bring oil prices down.

Falih has to find a delicate balance between keeping the oil market well supplied and prices high enough for Riyadh’s budget needs, while pleasing Moscow to ensure Russia remains in the OPEC+ pact, and being responsive to the concerns of the United States and the rest of the OPEC+, the sources said.

OPEC’s agreed share of the cuts is 800,000 bpd, but its actual reduction is far larger due to the production losses in Iran and Venezuela. Both are under US sanctions and exempt from the voluntary reductions under the OPEC-led deal.