Katie Bouman became a global sensat­ion over her role in genera­ting the world's first image of a black hole
By AFP
Published: May 17, 2019
Tweet Email 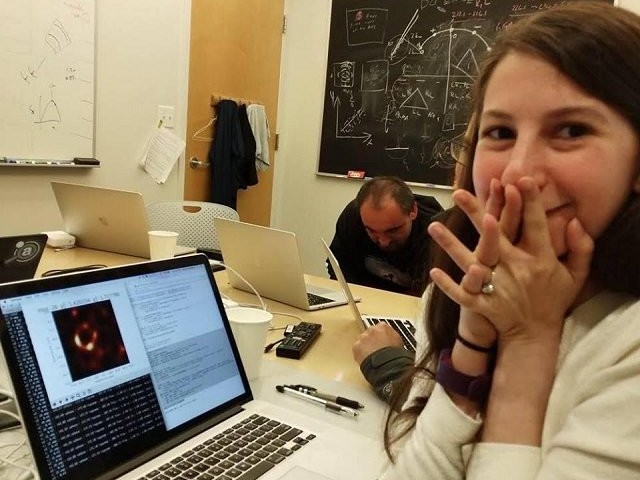 MIT grad student Katie Bouman was the one behind the algorithm which helped in capturing the image. PHOTO: KATIE BOUMAN/ FACEBOOK

WASHINGTON: US computer scientist Katie Bouman, who became a global sensation over her role in generating the world’s first image of a black hole, has described the painstaking process as akin to listening to a piano with broken keys.

Testifying before Congress on Thursday, the postdoctoral fellow at the Harvard Smithsonian Center for Astrophysics also suggested the technology developed by the project could have practical applications in the fields of medical imaging, seismic prediction and self-driving cars.

A photo released last month of the star-devouring monster in the heart of the Messier 87 (M87) galaxy revealed a dark core encircled by a flame-orange halo of white-hot plasma.

But since M87 is 55 million light years away, “This ring appears incredibly small on the sky: roughly 40 microarcseconds in size, comparable to the size of an orange on the surface of the Moon as viewed from our location on Earth,” said Bouman.

The laws of physics would require a telescope the size of our entire planet to view it: an impossible proposition.

The Event Horizon Telescope (EHT) Collaboration instead spent over a decade building an Earth-sized computational telescope that combined signals received by various telescopes working in pairs around the world.

However, since there are a limited number of locations, the telescopes are able to capture only some frequencies, leaving large gaps in information.

“As an analogy, you can think about the measurements the EHT makes a bit like notes in a song; each measurement corresponds to the tone of one note, ” said Bouman.

“Observing the black hole with the Event Horizon Telescope is a bit like listening to a song being played on a piano with over half of its keys broken.”

The approach led to numerous gaps that could be filled with infinite possibilities consistent with the data.

“But just as your brain may still be able to recognize a song being played on a broken piano if there are enough functioning keys, we can design algorithms to intelligently fill in the EHT’s missing information to reveal the underlying black hole image,” she concluded.

While the images were captured in 2017, the final result had to be independently validated by four EHT teams working around the world to avoid shared human bias.

The four images they produced varied slightly, but they all contained the same basic structure.

“Seeing these images for the first time was truly amazing and one of my life’s happiest memories,” recalled Bouman, who maintained a broad smile throughout her testimony.

The final image released to the public on April 10 this year was a composite of the four images further tuned by algorithms designed to eliminate human preferences.

Bouman said she first began working on the EHT as a graduate student studying computer vision at MIT and found the problem shared striking similarities with work she had done on brain imaging based on limited data from an MRI scanner.

“Thus, although the project was well outside of my core area, and I had no background in astrophysics let alone black holes, I hoped that I might be able to make a difference.”

She also hailed the early-career scientists who had come to the project from various fields and ranged from post-doctorates to undergraduates whose work was vital to the project.

“However, like black holes, many early-career scientists with significant contributions often go unseen,” she said.