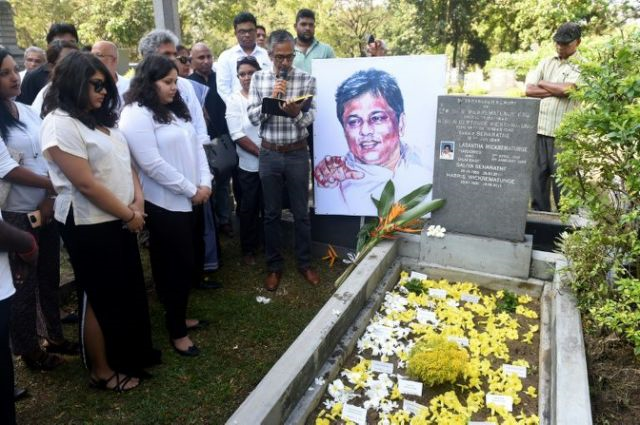 Wickrematunge was stabbed to death by members of a military intelligence unit in January 2009. PHOTO: AFP

COLOMBO: An international rights group on Thursday expressed alarm over the Sri Lanka army’s decision to reinstate an intelligence officer accused of high-profile attacks against journalists, including the assassination of a senior editor.

The New York-based Committee to Protect Journalists (CPJ) said reinstating major Prabath Bulathwatte created new threats for the media in Sri Lanka, which is currently under a state of emergency following the Easter terror attacks.

Bulathwatte was arrested in 2017 in connection with a string of attacks against journalists during the former regime of strongman president Mahinda Rajapakse and is currently on bail.

However, army commander Mahesh Senanayake last week told a local television network that Bulathwatte has been reinstated to boost the battle against local militants following the April 21 bombings in which 258 people died.

“Promoting to active duty an intelligence officer who has been implicated in the killing of one journalist and the torture of two others severely undermines Sri Lanka’s claim that it is fighting impunity for crimes against journalists,” said CPJ Asia Program Coordinator Steven Butler.

Editor Lasantha Wickrematunge was stabbed to death by members of a military intelligence unit in January 2009. Court records have named Bulathwatte as the key suspect.

The CPJ’s Butler said reinstating Bulathwatte within the intelligence setup would create “new threats to journalists in Sri Lanka, who are not safe to do their jobs”.

Sri Lanka’s war-time military commander Sarath Fonseka has accused the then defence secretary Gotabhaya Rajapakse, brother of the former president, of running a secret unit used to target journalists and dissidents, including Wickrematunge.

Gotabhaya, who is a US citizen, has denied involvement, but faces civil action in the United States, where a case has been filed by the slain editor’s daughter.

Wickrematunge had accused the defence secretary of taking kickbacks in arms purchases, including a deal to buy used MiG jet fighters, and was due to testify against him in court when he was killed.

Mahinda Rajapakse, president from 2005-15, and several members of his family are under investigation for alleged large-scale fraud and murder during his presidency.

All deny any wrongdoing and in turn accuse the current government of a political vendetta.