Trader­s say only small vendor­s are target­ed for enforc­ing price lists while wholes­alers are given a free hand
By Qasier Shirazi
Published: May 16, 2019
Tweet Email 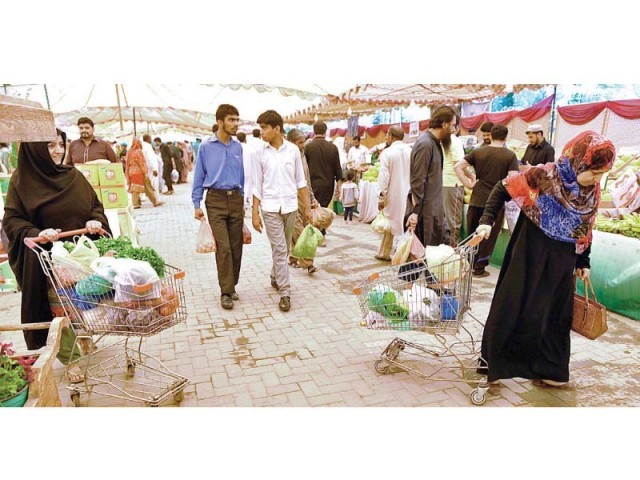 RAWALPINDI: Curbing prices during Ramazan is proving to be a tall order for the 52 price magistrates and the district administration of Rawalpindi. As a result, the hapless consumers have been left at the mercy of hoarders and profiteers.

The rate lists issued by the Rawalpindi Deputy Commissioner (DC) at the beginning of Ramazan, while displayed outside the stores, have little other value than to show officials that the shopkeepers are complying with regulations.

Officials and price magistrates can be seen going around the bazaars conducting raids and imposing fines on small vendors while large stores continue to operate on their own terms.

At the government-run and subsidized utility stores, consumers search through half-empty shelves to find their desired items.

The Ramazan bazaars set up by the district administration though, are proving some relief to the public where essential items such as sugar are available at discounted prices when compared to the open market. There, stocks run out quickly, causing some problems for people.

Lemons are available at fair price shops for Rs140 per kg which vanishes as early as 10 in the morning.

The DCs of twin cities of Rawalpindi and Islamabad met over controlling the price hike.

Sabzi Mandi Traders Union President Ghulam Qadir Mir stated that the district administration only targets the small vendors for checking prices while the wholesalers are given a free hand.

Muhammad Shafiq, a buyer at the Sasta Bazaar expressed his satisfaction over the arrangement in the market and said that apart form daily-use  items, fresh vegetable, fruits and meat were  also be available in one place which save both time  and energy during fasting.

Another customer complained about the shortage of some items and urged the authorities concerned to ensure the available of all items at Sasta Bazaar.