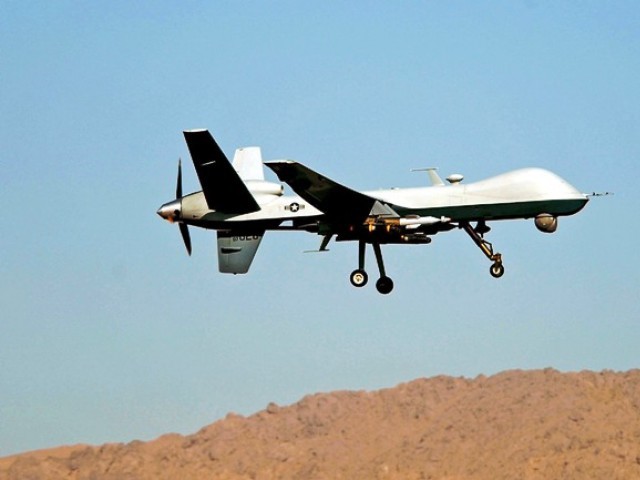 Two US drone strikes killed at least 26 people in the South Waziristan Agency on Monday, The Express Tribune learnt.

Pakistani intelligence officials said the suspected drone fired four missiles on a double cabin van in Kung Ghalai area of Bermal tehsil.  The alleged militants killed and injured in the attack are believed to be from the Hafiz Gul Bahadur group.

The area where the attack took place is two kilometres away from the Pak-Afghan border, close to the Shawal area of North Waziristan, about 29 kilometres north of agency headquarters Wana.

The second strike came later at night on Monday in the Mantoi area of South Waziristan, targeting two houses and killing 14 people.

Drone attacks have surged in the South Waziristan Agency in June, making the attack the sixth of the month, while North Waziristan which bore the brunt of most of the drone attacks last year, reported a single incident of drone strikes in June.

“The Americans are trying to infuse fear among militants about moving out to other areas,” security analyst and former ISI Khyber-Pakhtunkhwa  chief Brigadier Asad Munir said. Munir added that drones had already restricted militant “movements” in North Waziristan and militants had started infiltrating the Kurram and South Waziristan Agencies out of necessity.

Munir also believed that drone attacks were being carried out in the Wazir area of South Waziristan – a reference to the Waziri Taliban, loyal to Mullah Nazir, believed to be a pro-government militant.

With Additional input from agencies