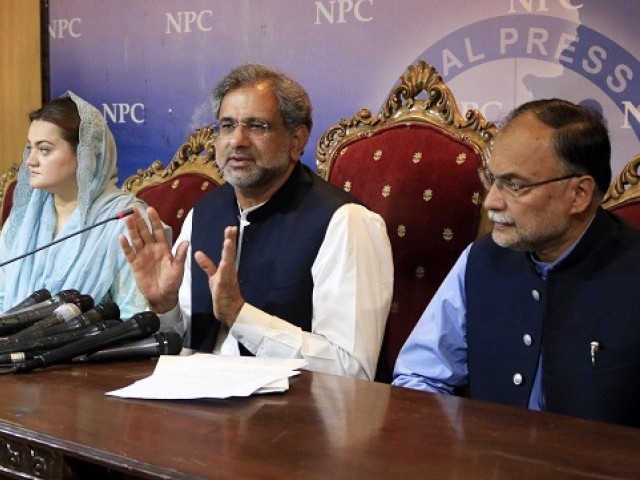 “We hope Prime Minister Imran Khan doesn’t take a U-turn on the amnesty scheme,” he said while addressing a press conference in the federal capital.

Abbasi, a former prime minister, also accused the PTI and its head, PM Imran, of double standards over the tax amnesty scheme. “When we introduced the scheme [in April last year], it was labelled as a criminal rehabilitation scheme. But now that Imran has introduced it, it suddenly is acceptable,” he remarked.

“Our amnesty scheme was a reforms package,” said Abbasi of the scheme which was offered during his time as prime minister. “Amnesty schemes cannot be launched every year.”

He also accused the government of politicising the $6 billion bailout deal reached with the International Monetary Fund (IMF) to stave off a looming balance-of-payment crisis.

“A new chapter of political vendetta has started in the country. After the National Accountability Bureau (NAB), the Federal Investigation Agency (FIA) has also stepped into the field of political revenge,” Abbasi said, accusing the government of using federal institutions to do its bidding.

“The National Highway Authority (NHA) has never complained against Ameer Muqaam’s son or his company. An allegation of Rs30 million was leveled while the company owned by Ameer Muqam’s son has Rs350 million in bank guarantees,” he said, adding that the joint secretary of the information ministry had written a letter upon orders of the higher authorities. “What shall we call it if it is not political vendetta?” said Abbasi.

Responding to a question pertaining to Pashtun Tahafuz Movement (PTM), the former prime minister said that the PML- N was not against PTM and rather had affection for it. “They have been elected through the vote of people,” he said, adding that if someone was working against the national interest or posed a security risk, then the government was responsible to carry out action against such elements.

On the extension of army chief, he said that the government had the discretion to allow extension in the tenure of the army chief. ‘Extensions given in the past brought losses rather than benefits to the institution,” he added.

He further said that the PML-N had submitted a requisition for National Assembly session.  ‘We need to discuss the recent wave of terrorism in the country and the deal made with the IMF.”

Reacting to the PML-N leader’s statements, Special Assistant to the PM (SAPM) on Information and Broadcasting Firdous Ashiq Awan said that the PTI-led government went to the IMF due to previous government’s policies.

“Opposition leaders and their spokespersons are mere tools for their corrupt leaders,” she said, adding that Shahid Khaqan Abbasi was a puppet prime minister whose strings were pulled by the Sharif brothers.

Accusing Abbasi of casting aspersions on the government’s accountability drive, Awan said that Abbasi also needed to explain how his airline started making profits while the national carrier was constantly in the red.

“Only those with clean records and intentions can hold others accountable,” said Awan. She said that even the Sharifs had promised to bring back the money plundered by Asif Zardari, who was the president during the tenure preceding the PML-N government.

She said the PML-N leadership was complaining about corruption as they were now getting caught. “The PML-N has always remained a safe haven and living example of corruption. It should stop trying to dictate to the government,” she added.