Neithe­r Saudi Arabia nor the UAE gave detail­s on the nature of the attack­s or accuse­d anyone of respon­sibili­ty
By AFP
Published: May 14, 2019
Tweet Email 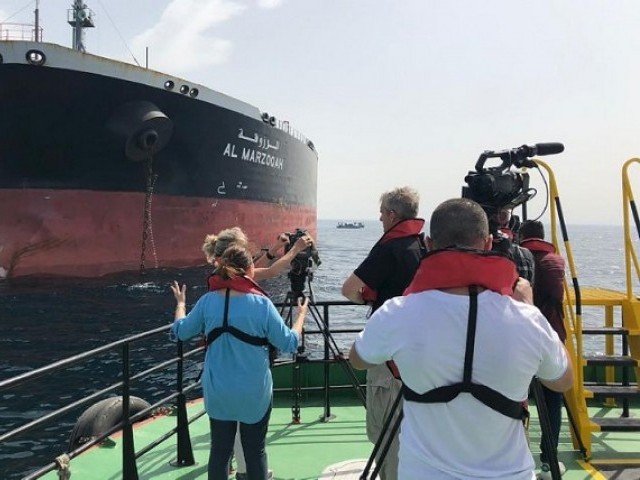 FUJAIRAH, UNITED ARAB EMIRATES: Four ships, including two Saudi oil tankers, were damaged in mysterious “sabotage attacks” that inflamed Gulf tensions on Monday amid a standoff between the United States and Iran.

In the face of growing international concern, US Secretary of State Mike Pompeo scrapped a planned visit to Moscow and headed to Brussels instead for talks with European officials, as Britain warned of the danger of conflict erupting “by accident” in the Gulf.

Turning up the pressure on Tehran after the United States deployed B-52 bombers and an assault ship to bolster an aircraft carrier in the region, President Donald Trump warned that Iran would “suffer greatly” were it to “do anything” to threaten US interests.

Tehran meanwhile called for an investigation into Sunday’s “alarming” attacks off the Emirati coast and warned of “adventurism” by foreign players to disrupt maritime security.

A UAE government official said the Saudi oil tankers Al-Marzoqah and Amjad were attacked off the emirate of Fujairah along with the Norwegian tanker Andrea Victory and an Emirati ship, the A Michel.

Neither Saudi Arabia nor the UAE gave details on the nature of the attacks or accused anyone of responsibility.

No link has officially been drawn between the maritime incidents and US accusations that Tehran was planning “imminent” attacks against US interests in the region.

Asked whether the United States believed Iran played a role, Brian Hook, the US special envoy for Iran, declined to comment, saying only that US authorities would be assisting the investigation at the request of the UAE which has called the incidents “deliberate sabotage.”

Describing Pompeo’s talks with his European counterparts, Hook said they had discussed “what seemed to be attacks on commercial vessels.”

Underscoring the international concern, German Foreign Minister Heiko Maas said he used his one-on-one with Pompeo to stress that “we are concerned about the development and the tensions in the region, that we do not want there to be a military escalation”.

“We are very worried about the risk of a conflict happening by accident with an escalation that is unintended on either side but ends with some kind of conflict,” he said as he arrived for a meeting of EU foreign ministers in Brussels.

And in New York, the United Nations called on all sides to “exercise restraint for the sake of regional peace.”

Saudi Energy Minister Khalid al-Falih said the kingdom’s two tankers suffered “significant damage” but there were no casualties or any oil spill.

The Andrea Victory’s managers, Thome Group, said the tanker had a hole in the hull area “after being struck by an unknown object on the waterline”.

The crew were unharmed and the ship was in no danger of sinking, it said.

Fujairah port is the only Emirati terminal located on the Arabian Sea coast, bypassing the Strait of Hormuz, through which most Gulf oil exports pass.

Iran has repeatedly threatened to close the strait in case of a military confrontation with the United States.

“If, and it’s an ‘IF’, there really has been a deliberate attempt to damage these oil tankers, then it’s possibly a warning from Iran about the consequences of anybody taking military action against Iranian targets anywhere in the region,” said Middle East analyst Neil Partrick.

The spike in tensions came after Tehran said Wednesday it had stopped respecting limits on its nuclear activities agreed under a 2015 deal that has since been abandoned by Washington.

He “warned against plots by ill-wishers to disrupt regional security” and “called for the vigilance of regional states in the face of any adventurism by foreign elements”, a statement said.

Almost all the oil exports of Saudi Arabia, Iraq, UAE, Kuwait, Qatar and Iran itself, at least 15 million barrels per day, are shipped through the Strait of Hormuz.

Karen Young, a resident scholar at the Washington-based American Enterprise Institute think tank, said the incidents were “clearly… more than a one off attack, but something more coordinated.”

“Tensions are high and have been escalated by the US as well. We have to be wary of tit for tat provocations, and those that may be misinterpreted or even false flag actions,” she told AFP.

Shia-majority Iran rivals Sunni-ruled Saudi Arabia for influence in the Middle East, with the two taking opposing sides in multiple regional conflicts including in Yemen.