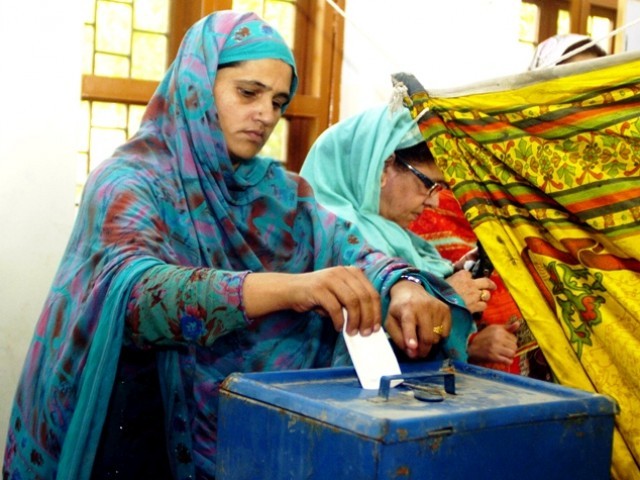 A Kashmiri woman casts her vote at a polling station in the general elections in Muzaffarabad. PHOTO: AFP

In an election that had attracted unprecedented attention, the result was in line with the history of the AJK Legislative Assembly: the party in office in Islamabad – the Pakistan Peoples Party (PPP) – came to power in Muzaffarabad too, winning 19 of the 36 seats whose results were announced late on Sunday night.

The Pakistan Muslim League Nawaz (PML-N), whose direct foray into AJK electoral politics had made headlines around the country, was able to win only 9 seats, four of which were those representing the Kashmiri diaspora in Punjab, where the party is in office in the provincial government.

The Muslim Conference, the Kashmir-based party that has ruled the region for much of its history since 1948, had one of its poorest showings, winning only four seats. While outgoing AJK Prime Minister Sardar Attique Ahmed Khan of the Muslim Conference was able to win his own seat, his son was defeated in LA-26, in a constituency where opponents alleged that the ballot papers  were designed to ensure that votes cast by PPP and PML-N voters would be invalidated.

Yet the Muslim Conference’s strategy of trying to punish the PML-N for abandoning its alliance with them appeared to work: in several constituencies, the PPP candidate was able to win a narrow victory over the PML-N candidate because a strong MC candidate was playing the role of a spoiler, splitting away enough right-wing votes to ensure that the left-wing PPP’s candidate won.

The PPP appears willing to utilise the Muslim Conference’s disenchantment with the PML-N to create an alliance. Prime Minister Yousaf Raza Gilani was reported to have called AJK Prime Minister Sardar Attique to discuss the possibility of a coalition, even though Sunday’s results appear to indicate that the PPP could form a government in Muzaffarabad without needing any partners.

Despite the tumultuous nature of the election, however, there were several constants. Many of the stalwarts of AJK politics won their elections by relatively comfortable margins, including the current prime minister and three former prime ministers: Raja Farooq Haider Khan, Barrister Sultan Mehmood, and Sardar Muhammad Yaqoob Khan.

Two independents also won seats for the AJK Legislative Assembly. It was not immediately clear which party they might choose to align themselves with when the legislature meets.

Of the 49 seats in the region’s assembly, 41 are elected representatives. Twenty-nine represent the residents of AJK itself, while 12 represent the Kashmiri diaspora in different parts of Pakistan. The election commission had postponed the elections for at least three constituencies before Sunday, citing law and order concerns.

By 11 am on election day, a fourth election – for LA-37 in Lahore – had also been postponed. Results in another constituency, LA 17 in Poonch, had been suspended after political activists set the returning officer’s office on fire, reportedly also burning the records of the results in that constituency.

Results in two constituencies were awaited till the filing of this story.