Five things to know about Lithuania

Five things to know about Lithuania

As Lithua­nians to vote in round one of a presid­ential electi­on
By AFP
Published: May 12, 2019
Tweet Email 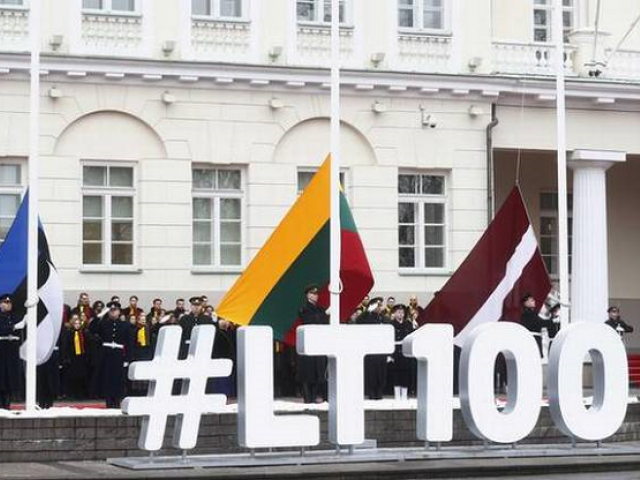 This picture shows (from left to right) flags of Estonia, Lithuania and Latvia at a flag-rising ceremony next to the Presidential palace during the country’s centenary celebration in the country’s capital of Vilnius, on February 16, 2018. PHOTO: REUTERS

VILNIUS: Lithuanians vote in round one of a presidential election on Sunday, with most candidates pledging to solve a growing problem with inequality and poverty.

Here are five things to know about Lithuania:

Lithuania’s statehood stretches back to the 13th century when its first king, Mindaugas, was crowned in 1253.

It made up one of medieval Europe’s largest military empires – including territories of current Belarus, Ukraine and Russia – and was its last pagan country before Christianity took root at the end of the 14th century.

Lithuanians proudly claim that their language is the oldest surviving Indo-European language.

Modern Lithuania was an independent nation between the two World Wars. Annexed during World War II, it remained under Moscow’s thumb during the Cold War, before becoming the first Soviet republic to declare independence in 1990.

Five things to know about Ukraine

One of NATO’s most hawkish members on Russia, Lithuania is among only eight allies to meet a NATO target of spending two percent of GDP on defence.

It reinstated limited conscription in 2015, a year after Moscow’s annexation of the Crimean peninsula from Ukraine, with an annual draft of nearly 4,000 men between the ages of 19 and 26 for a nine-month period.

Germany leads a multi-national battalion in Lithuania since 2017 as part of a NATO troop increase in the Baltic states and Poland to reassure eastern allies neighbouring Russia.

Europe’s most popular sport, football, has few fans in this basketball-mad nation, ranked number six in the world.

Basketball is dubbed Lithuania’s second religion after Catholicism, and away games have drawn merry bands of travelling fans clad in the national colours of yellow, green and red.

Lithuania has never qualified for a major football tournament, and it holds the lowly 132nd spot in the latest FIFA world rankings.

Lithuania, the largest and the southernmost Baltic state, has enjoyed robust economic growth since joining the European Union in 2004, but economic inequality and open borders also encouraged heavy emigration to richer Western European countries such as Britain and Norway.

A eurozone member since 2015, it has lost more than one tenth of its population over the past decade and currently has 2.8 million people.

But rapid annual wage growth of around 10 percent is expected to turn the trend around and most economists predict more people will arrive than leave this year for the first time in decades, partly due to growing immigration from Ukraine.

Outgoing President Dalia Grybauskaite, dubbed Lithuania’s Iron Lady for her tough talk and black belt in karate, is the first female president of Lithuania, elected in 2009 and reelected in 2014.

At the same time, Lithuania has become the only EU state with an all-male cabinet of ministers after a government reshuffle earlier this year, prompting critics to argue that gender inequality is still prevalent.