‘Government designates 2019 as the year of nurses’

‘Government designates 2019 as the year of nurses’ 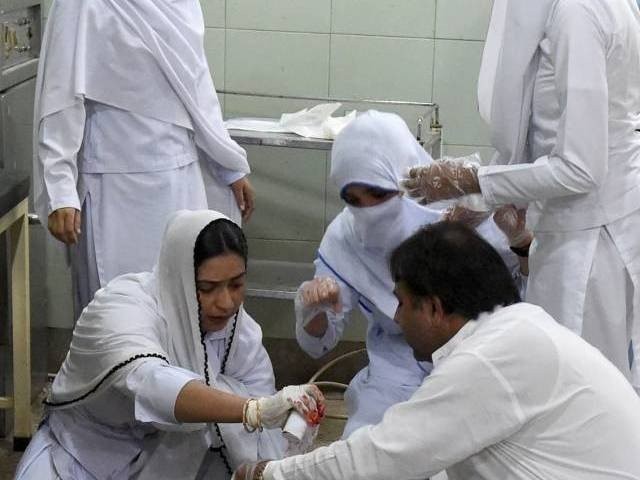 KARACHI: The government of Pakistan has designated 2019 as the year of nursing. Recognising their role in promoting universal healthcare and safeguarding women’s rights, the government is working to enhance the role and voices of nurses and midwives in making a health policy. These views were expressed by speakers at the Aga Khan University School of Nursing and Midwifery (SONAM) at an event held on Friday in honour of International Midwives’ Day and International Nurses Day. The former is commemorated on May 5 and the latter on May 12 annually across the globe.

“The government is taking necessary steps to recognise nurses as equal partners in the healthcare system,” said Sindh Health and Population Minister Dr Azra Pechuho in a message submitted ahead of the event.

Dr Pechuho noted that nurses and midwives were already providing quality healthcare to communities across the country. She called on all stakeholders to encourage and facilitate efforts to deepen their impact on the healthcare system.

The event at SONAM was attended by nursing leaders, policy makers, senior academics, practicing nurses and midwives, students and others. Speakers at the event discussed the launch of new initiatives following Dr Arif Alvi’s declaration, and in light of Pakistan joining Nursing Now, a global initiative of the International Council of Nurses and World Health Organisation (WHO).

“Nursing is emerging as one of the best professions in the healthcare sector and we are collectively making efforts to improve working conditions for our nurses and midwives to ensure they can continue to provide quality healthcare services,” said Sindh Nursing Director General Shabbir Hussain during his keynote address. He highlighted the crucial partnership between nursing schools, hospitals and regulatory bodies in Pakistan in raising the status and role of nurses.

Other speakers noted that besides encourage investment in the nursing workforce and recruiting more nurses in leadership roles, the focus has to shift to research, capacity building and implementation of best practice [commercial or professional methods widely accepted as being most effective].

SONAM Dean Dr David Arthur noted that nurses now have a variety of career opportunities open to them. “Today’s nurses are seen as educators, researchers and counselors in addition to working in different healthcare settings.” Dr Arthur, who is also a member of the Pakistan chapter of Nursing Now, added that they were also seeking specialisation within nursing in various clinical areas, further highlighting their roles as front-line caregivers and strong patient advocates in all areas within a healthcare facility.

Nurses have come a long way over the past few decades and are in a variety of leadership positions in clinical and academic spheres, said Laila Cassum, a senior instructor at SONAM. “They stand ready to support the government’s efforts to achieve targets for the United Nations’ sustainable development goals,” she added.

Speeches were followed by a panel discussion on the challenges nurses and midwives face at public and private healthcare institutions. Panelists highlighted the need to increase the proportion of the healthcare budget allocated for nursing and called for further steps to recognise their contributions.