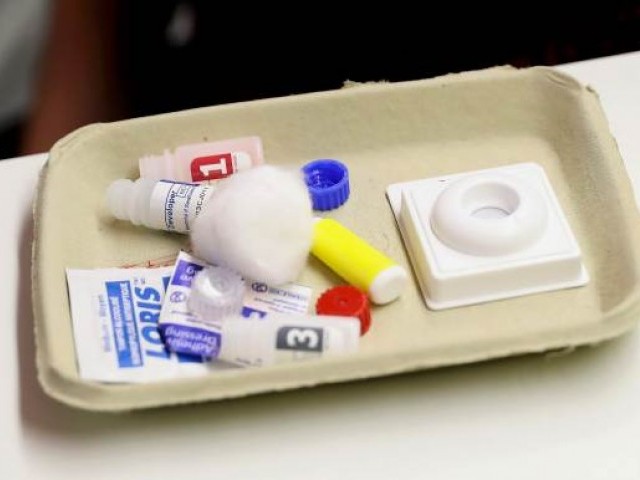 A Reuters file photo of a HIV testing kit.

PESHAWAR: Khyber-Pakhtunkhwa Health Minister Dr Hisham Inamullah Khan distributed self-test kits of HIV-AIDs among the representatives of the transgender people of the province.

A ceremony was held at the minister’s office in the Health Ministry attended by MPAs Momina Basit, Dr Asia Asad, and Rabia Basri while the secretary health Dr Farooq Jameel, AIDS Control Project Director Dr Saleem Khan were also present on the occasion.

Health Minister Dr Hisham appreciated the efforts of the three members of the provincial assembly, who made the day possible that transgender people could carry out tests at their living places.

“We have directed the relevant quarters at the hospitals to provide best health services to the transgender community,” the minister said urging the community members to also get equipped of the modern education and training so that they could get a respectable livelihood.

“We are also working on legislation that would give special quota in the public jobs for transgender people could be secured and valued the chairperson of the standing committee for social welfare Momina Basit who put her energy for providing a safe working environment to the transgender community,” he said.

On the occasion, MPA Momina Basit who is also the head of K-P Assembly Standing Committee for Social Welfare said Blue J Diagnostics had provided the 500 HIV-AIDS testing kits for free distribution. She said PTI led government believes in equal treatment to all humanity and is trying to provide equal opportunity in education, health, and government employment.