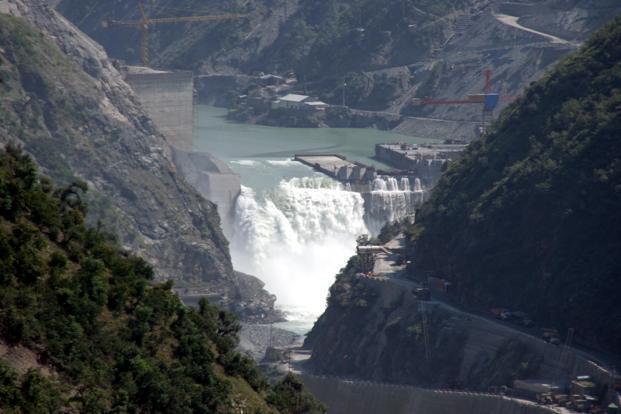 ISLAMABAD: The Foreign Office on Thursday said Pakistan wants that historic Indus Waters Treaty (IWT) should be allowed to function after an Indian minister threatened to stop Pakistan’s share of water if Islamabad ‘does not stop supporting terror groups.’

Speaking at a weekly briefing, Foreign Office spokesperson Dr Muhammad Faisal said the 1960 treaty was signed by both the countries but India has been violating the treaty in the cases of Kishanganga and Ratle Hydro Electric Power Projects.

He said Pakistan has already raised the matter at the dispute resolution mechanism of the World Bank, which brokered the IWT. However, the matter has not been resolved, as yet.

“Pakistan wishes that the Indus Waters Treaty should be allowed to function and the dispute resolution mechanism should take its due course. We urge the World Bank to empanel the Court of Arbitration, so that a resolution is reached in this regard,” the spokesperson stressed.

His reaction came in response to the statement issued by India’s Union Minister Nitin Gadkari that New Delhi will stop Pakistan’s share of water – allocated in the IWT – if Islamabad “does not stop supporting terror groups”.

“We have already started a study into the matter. The water that will be stopped from flowing into Pakistan and will be given to Punjab, Haryana and Rajasthan,” said the multi-portfolio Indian minister during a press conference on his campaign tour.

According to Hindustan Times, he said India and Pakistan signed the water treaty based on friendship that has long since vanished. “So we are not bound to follow this treaty,” said Gadkari, who also holds the portfolio of shipping and water resources.

In March, soon after tensions between the two nuclear-armed neighbours flared up and the two sides skirmished in the air, during which at least two Indian Air Force jets were shot down, New Delhi started impeding the flow of three rivers shared by the two countries.

New Delhi had stopped 0.53 million acre-feet of water from the three eastern rivers flowing into Pakistan. Talks on the lingering water disputes between the longtime rivals were held in August 2018 but ended without any major breakthrough.

Under the IWT, Islamabad has unrestricted access to the western rivers Indus, Jhelum and Chenab, while New Delhi enjoys the same authority over the eastern rivers Ravi, Beas and Sutlej.

Responding to a question about the increase in Indian defence budget, the spokesperson said India has been trying to push the region into an arms race. “Let me say that an increase in the defence budget is not the sole determinant of a nation’s strength. You have seen the results of misadventure by India on February 27, 2019 and the befitting reply given by our military forces,” he maintained.

He said Pakistan desired ‘cordial’ relations with India. To another question about the shortage of famous summer drink Rooh Afza in India, Faisal said Pakistan is ready to meet the Indian demand. “If the supply of Rooh Afza from Pakistan quenches their thirst, then we will certainly want to do so,” he said.

He condemned human rights violation by India forces in Kashmir and said since 1989, when resistance movement in the valley started, India has killed 19 journalists and arrested dozens.  The spokesperson said India has also detained many Hurriyat leaders, including Yaseen Malik despite his ill health.

He said Pakistan supports dialogue and political solution to Afghanistan issue with focus on “Afghan-led and Afghan-owned approach”. He said Pakistan urges all the stakeholders to converge their energies on negotiations to avoid conflict in the already war-torn country.

On chances of meeting between Foreign Minister Shah Mehmood Qureshi and Indian External Affairs Minister Sushma Swaraj at the upcoming Shanghai Cooperation Organisation moot on May 21-22, he said: “Informal handshake could be a possibility; however there is no meeting scheduled so far”.

The FO spokesman confirmed that Aasia Bibi, a blasphemy accused acquitted by the Supreme Court on October 31, 2018, had left Pakistan on her own free will. However, he did not specify which country she has moved to.

Owing to chaotic situation in Libya, he said, Pakistan’s mission is in touch with the representatives of Pakistani community and has advised them to register with the embassy for prompt coordination in case of any emergency situation.

He declined to comment on recent detention of some Chinese citizens by the Federal Investigation Agency on charges of sex trafficking and said the matter pertains to Ministry of Interior.

[WITH ADDITIONAL INPUT FROM AGENCIES]