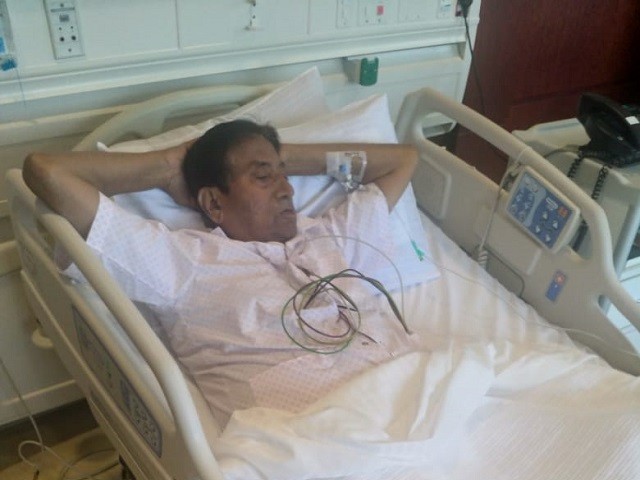 Cites reasons ‘beyond his control’, seeks adjournment till after Ramazan.PHOTO: EXPRESS

ISLAMABAD: Former military ruler Pervez Musharraf on Wednesday cited medical reasons ‘simply beyond his control’ while expressing his inability to come to Pakistan, a day before he was scheduled to appear before a special court in a case pertaining to charges of high treason.

The special court, which will resume resuming hearing of the treason case on Thursday, was asked by the Supreme Court to announce its verdict in the treason case if Musharraf fails to appear before it on May 2.

Musharraf, through his counsel Salman Safdar, has requested the court to adjourn the case till after Ramazan. The application states that in light of the life-threatening medical condition of the petitioner (Musharraf), supported by medical certificate and photographic evidences, his absence was caused by factors beyond human control.

It also prayed the court to take into account the 76-year old’s age and existing medical complications including those of the heart and the kidney.

Musharraf to return on May 1, says lawyer

The court must give the former president reasonable time to appear physically before the court for his examination under Section 342 of the Code of Criminal Procedure (CrPC), says the application which is available to The Express Tribune.

Musharraf, who was indicted for high treason by a special court in March 2014, left for Dubai in 2016 to “seek medical treatment” and hasn’t returned since. The SC had said Musharraf would lose the right of defence in case of non-appearance on next hearing.

In his application, the former president’s counsel pleaded the special court that in the ‘interest of justice’ and on compassionate grounds, the matter be adjourned till after Ramzan.

It added that Musharraf was keen to return, while stating that he came to Pakistan on March 24, 2013, of his own freewill and initiative to face three criminal cases. The treason cases were filed later, it added.

The application said that the trial could not be completed during the two years when petitioner (Musharraf) was available and present in Pakistan. Musharraf, in his application, says that his absence is not deliberate, willful or an excuse to avoid the ongoing treason case.

In the light of life-threating illness and permission by government to travel abroad for treatment, the petitioner should not be treated as ‘fugitive from law’ or ‘proclaimed offender’ as was declared through the special court in June 2016, it added.

It also stated that Musharraf’s health has deteriorated and worsened significantly, with the latest assessment terming his condition ‘unsafe’ with very high risk for his health and wellbeing in case he discontinues treatment or travels. It added that Musharraf has experienced weight loss while his physical and mental health have been compromised.