LAHORE: The 10 major electricity distribution companies have published names of 45,914 defaulters with outstanding bills of Rs1 million or more on their websites. The defaulters owe a total of Rs244.79 billion in outstanding dues.

The distribution companies published the names of defaulters on their websites upon directions from the energy ministry. The companies had set April 30 as the deadline for defaulters owing Rs1 million or more to clear their bills. Of those that failed to comply, 4,693 defaulters saw their connections cut, while a majority of the 41,221 defaulting connections appear to be power connections for tube wells. 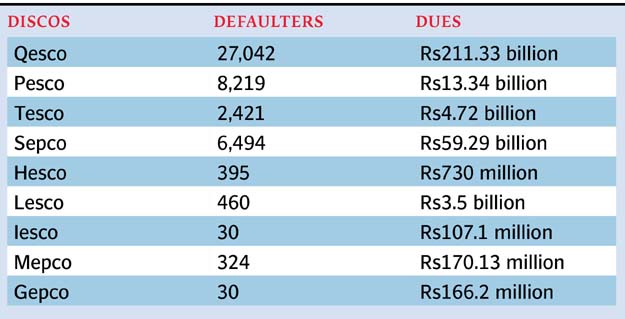 Federal Energy Secretary Irfan Ali told The Express Tribune that the names of the defaulters are not published with the intent of humiliating them. The names, he said, were published to persuade the defaulters to pay their dues and fulfil their responsibility to the country.