Pakistan's debt worth $27b to mature in two years: IMF

Pakistan's debt worth $27b to mature in two years: IMF

Techni­cal teams are locked in negoti­ations for 10 days; hope to clinch deal on May 10
By Shahbaz Rana
Published: April 30, 2019
Tweet Email

ISLAMABAD: The International Monetary Fund (IMF) has said that $27 billion worth of Pakistan’s external debt will mature in two years – the mounting repayment burden that carries serious implications for bailout package talks started on Monday.

The technical teams of the IMF and Pakistan have locked into negotiations for 10 days amid authorities hoping to clinch a deal on May 10.

The $27 billion maturing external debt is equal to 27% of Pakistan’s total external debt and liabilities as of end February, highlighting the gravity of challenges that the government of Prime Minister Imran Khan faces. 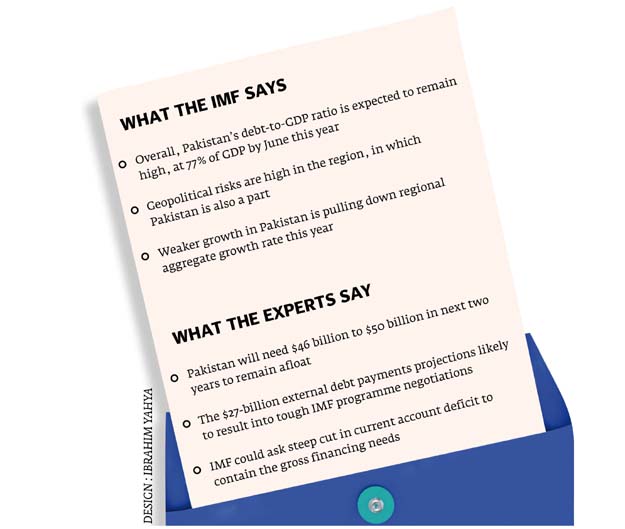 After including financing requirements of the current account deficit, Pakistan will need $46 billion to $50 billion in next two years to remain afloat, according to assessments of the government and some private sector experts.

The $27 billion external debt repayment figure has been disclosed by the IMF in a new Regional Outlook Report Update on the Middle East, North Africa, Afghanistan that it officially made public on Monday.

“Many countries have large foreign currency debt – some $27 billion – set to mature in the next two years, leaving them more exposed to slower growth prospects and financial market volatility,” said the IMF. In a separate chart in the report, the $27 billion figure has been shown against Pakistan – the highest repayment by any country in the region.

Overall, Pakistan’s debt-to-GDP ratio is expected to remain high, at 77% of Gross Domestic Product by June this year, according to another IMF report. The IMF’s Public Debt Sustainability Analysis in Market Access Countries considers emerging market countries to be at higher risk of debt distress where public debt exceeds 70% of GDP. Pakistan has already crossed this dangerous threshold at the end of the PML-N government when debt-to-GDP ratio soared to 72.5%.

The IMF has released the report on the day Pakistan and the IMF began talks for a possible bailout package. Earlier, in November last year both the sides had failed to reach staff level agreement due to serious difference on every important issue.

But this time, the authorities expect that the remaining differences would be bridged and both the countries would conclude a deal for a $6.5 billion Extended Fund Facility, spanning over three years.

Prime Minister Imran Khan on Friday met with IMF Managing Director Christine Lagarde on the sidelines of the Belt and Road Forum at Beijing. It was the second meeting between the two, aimed at breaking an impasse in talks.

“The two leaders agreed on the importance of the Fund programme and to work towards an agreement,” stated an official handout the PM’s Office issued after the meeting.

The country has already devalued its currency by 35% in the past 15 months.

The $27 billion external debt payments projections by the IMF are likely to result into a tough IMF programme negotiations. The IMF is likely to ask Pakistan for sharing with it a complete picture of gross external financing needs in the next two years.

It is estimated that Pakistan will need minimum $20 billion only for current account deficit financing in the next two years.

It will be challenging for the IMF to oversee a programme where Pakistan’s external financing needs in two years will be close to $50 billion and its gross official foreign currency reserves are at the same time protected at a level sufficient to finance three months of imports.

Pakistan’s gross financing needs in the next two years could hit a minimum $50 billion and it will have to get short-term debt rolled over besides securing new loans to meet external obligations, according to Shahid Kardar, former governor of the central bank.

In his assessment, the government would have to contract nearly $35 billion in the next over two years to meet the financing needs. The amount that will have to be rolled over or rescheduled into long-term loans will be over $15 billion in just two years.

The IMF’s new regional outlook update also noted that geopolitical risks are high in the region, in which Pakistan is also a part. “The impact and timing of major geopolitical developments-including tensions between India and Pakistan, are not yet clear,” according to the report.

The report underlined that weaker growth in Pakistan is pulling down the regional aggregate growth rate this year, with large macroeconomic imbalances and ongoing policy adjustment challenges expected to slow Pakistan’s growth from 5.2% in 2018 to 2.9% in 2019.

“Regional inflation is projected to pick up slightly to 11.3% in 2019, primarily due to higher inflation in Egypt (fuel subsidy reform) and Pakistan (weaker exchange rate),” according to the IMF.