All five are being tried by Spain's Suprem­e Court for instig­ating a secess­ion attemp­t in 2017
By AFP
Published: April 29, 2019
Tweet Email 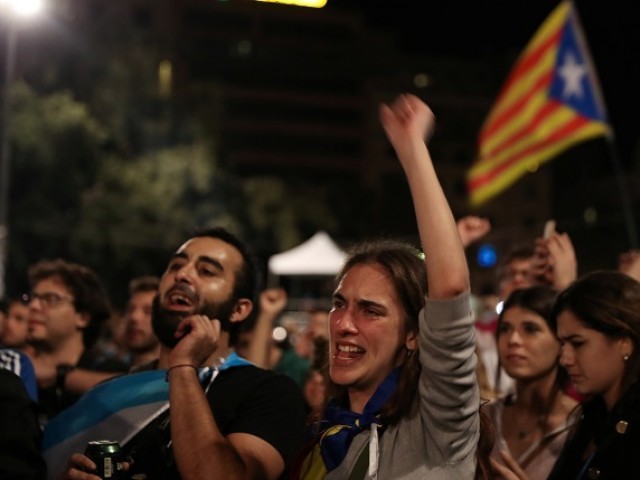 People react as they listen to former Catalan president Carles Puigdemont during a gathering at Plaza Catalunya after voting ended for the banned independence referendum, in Barcelona, Spain, on October 1, 2017. PHOTO: REUTERS

MADRID: Five jailed Catalan separatists were elected in Spanish elections on Sunday, as their parties made gains in snap polls won by the socialists and also marked by the emergence of the far-right.

The northeastern region’s former vice-president Oriol Junqueras, who along with then Catalan president Carles Puigdemont instigated a secession attempt in 2017, was one of those elected to the lower house. He led the list of his ERC separatist party.

Others include civic leader Jordi Sanchez and Jordi Turull, Catalonia’s government spokesman at the time of the attempt to break from Spain in October 2017.

Both were candidates for Together for Catalonia, the party of Puigdemont, who fled Spain and avoided arrest. Josep Rull, also part of Catalonia’s regional government at that time, was also elected to the lower house.

Raul Romeva, in charge of Catalonia’s foreign affairs at the time of the secession bid, was elected to the Senate.

All are in jail and are currently being tried at Spain’s Supreme Court.

The elections saw Prime Minister Pedro Sanchez’s socialists win, but without the necessary majority to govern solo in a fragmented political landscape marked by the far-right’s entry into parliament.

US military spending up for first time in 7 years: Sipri