A small French town becomes a model for integrating refugees

A small French town becomes a model for integrating refugees

In Alsace villag­e, refuge­es are part of the fabric­
By AFP
Published: April 28, 2019
Tweet Email 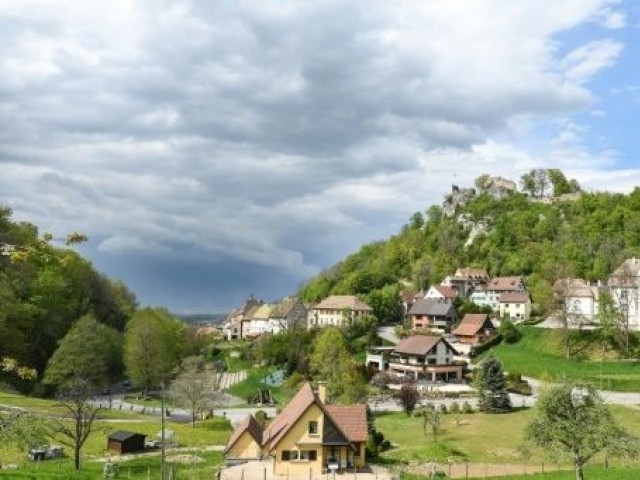 In Alsace village, refugees are part of the fabric. PHOTO: AFP

In the hilltop town of Ferrette near the border with Switzerland, few would expect to encounter Eritreans exploring the ruins of its medieval chateau or Chechens walking its steep narrow streets.

But this tiny town in eastern France has opened its doors to asylum seekers who now represent some 10 percent of the population.

As campaigning enters the final month before May’s European elections, the migrant question has been a central issue across a continent sharply divided over how to handle the influx of people seeking safety in Europe.

Although the flows have dropped sharply since 2015 when more than a million newcomers arrived, triggering Europe’s worst migration crisis since World War II, thousands more come every week, with nearly 19,000 arrivals since the start of the year.

With Europe’s governments paralysed over what to do and tensions rising on the ground, there has been a surge in support for populist and far-right parties, who have used the opportunity to further anti-immigrant agendas.

But not everywhere, and certainly not in Ferrette where Mayor Francois Cohendet has overseen a successful integration and says the migrants’ presence there is “not an issue” but just a part of the community’s normal life.

Which might have been quite a challenge in this town of 740 people in the southern part of Alsace, a region where the far-right has gathered a sizeable following.

Since 2016, Ferrette has permanently taken in about 80 asylum seekers – half of them children – from places as far-flung as Afghanistan, Sudan, and Armenia.

All of them are hoping to be recognised as refugees – or at the very least, that France will grant them “subsidiary protection”, the status granted to asylum seekers who do not qualify as refugees.

“They told me that Alsace was an area where there was racism but I haven’t felt it,” says a smiling Djoe Kabuka, a Congolese national.

The only thing about Ferrette, he says, is the lack of public transport and the need to travel to Mulhouse, a town 30 kilometres (18 miles) away, to find the sort of foods the refugees are used to.

The other thing is the weather. “It gets very cold and very hot here,” smiles Abundance, a teenager from Nigeria.

It was only after a squadron of gendarmes was relocated in 2015, leaving their former barracks empty, that regional officials approached the mayor with a request to use the premises as temporary accommodation for asylum seekers.

And when Cohendet accepted, he found himself on the receiving end of some stiff opposition, even from members of his staff.

“The population, which was initially very resistant to the idea, has seen that everything has gone well, that these are discreet people, who keep themselves to themselves and are not aggressive,” he says.

Pulling out a cardboard folder, he pulls out a pile of flyers and pamphlets. Some carry angry slogans like “Not one migrant in Ferrette” or “This is our home” while others use violent language.

The first to arrive were “two Sudanese with black skin, wearing sandals in the snow,” he recalls.

But while some were protesting, he also saw other residents joining together to help, with the emergence of a group called “Neighbours Around the World” that offered them French lessons, access to a games library, cooking classes and even lifts to the hospital.

Samir Beldi, director of accommodation at the Mulhouse/Ferrette branch of Adoma, the housing authority that lodges migrants, said things had worked out well.

“The volunteers managed to repair the damage after a few initial worries. There were some pre-conceived ideas but we’ve turned the page on that,” he said.

“These are not ‘poor people’, they weren’t necessarily poor back home,” she explains. “Some of them have significant qualifications. There is diversity among asylum seekers.”

The huge apartments once occupied by gendarmes each host large families.

The children are taught in a specially-created class at the school in Ferrette which they walk to every day, bringing youthful voices to the village streets.

Inside a split-level apartment with faded yellow walls, a newly arrived Sri Lankan family with a 14-year-old boy and three-year-old twins are sharing the kitchen with an Armenian woman and her 17-year-old son.

Outside the barracks, the green spaces are full of life.

An Afghan boy walks arm-in-arm with his little Nigerian friend as girls climb up the gate in the playground. Some women are leaving a sewing workshop as a volunteer helps a group of studious adults conjugate French verbs.

“We involve them in local life, in people’s daily lives – in Bastille Day celebrations, in New Year festivities.. Every time we can get them together with the local population we do it,” says Elisabeth Schulthess, head of Neighbours Around the World.

For the volunteers, though, the most frustrating aspect is the short duration of their stay as they built close ties with the exiles.

Once their asylum demand is accepted, they have three months to leave the centre. Those who obtain the right to stay in France often move to Mulhouse, however, where the jobs pool is bigger.

But Schulthess complains there is very little in the way of social support.

In 2018, 54 per cent of the 141 people who came won the status of refugee or subsidiary protection in France.