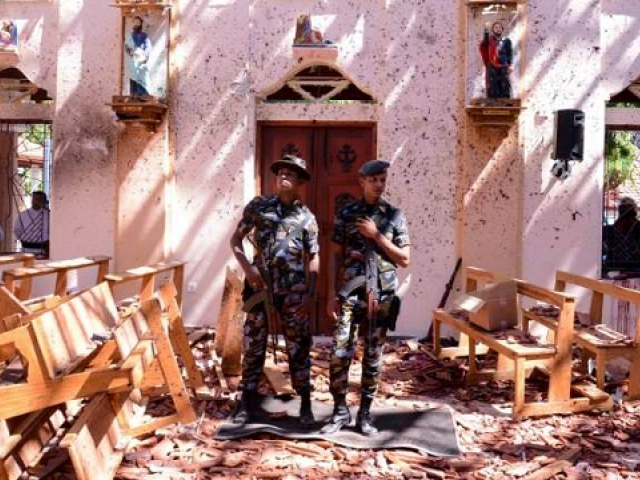 Sri Lankan authorities swept up more people, including foreigners, for questioning on Thursday as they probed deeper into the Easter Sunday bombings, which killed 359 people in potentially the deadliest operation claimed by the militant Islamic State.

Police said an Egyptian and several Pakistanis were among those detained overnight, although there was no immediate suggestion they had direct links to the attacks on three churches and four hotels that also wounded about 500 people.

Police on Thursday said 16 more people were detained for questioning overnight, taking the number detained since Sunday to at least 76. That number includes a Syrian national. A police statement said one of those detained overnight was linked to a ‘terrorist organization’ but gave no other details.

It said another was taken into custody after they investigated posts on the individual’s Facebook page and found what they described as ‘hate speech’. “It was related to the spreading and preaching of terrorism,” a police spokesman said.

Others have also been caught up in the broader crackdown.

Police said they detained an Egyptian who was found not to have a valid visa or passport. The man taught Arabic in a school about 70 km (45 miles) from the capital, Colombo, and had been living in Sri Lanka for more than seven years.

A police spokesperson also said a group of Pakistanis had been detained among an unspecified number of foreign nationals for overstaying their visas.

The bombings shattered the relative calm that has existed in Buddhist-majority Sri Lanka since a civil war against mostly Hindu, ethnic Tamil separatists ended 10 years ago, and raised fears of a return to sectarian violence.

President Maithripala Sirisena met representatives of different faiths later on Thursday to address concerns of a sectarian backlash. Sri Lanka’s 22 million people include minority Christians, Muslims and Hindus. Until now, Christians had largely managed to avoid the worst of the island’s conflict and communal tensions.

Hundreds of Muslims have fled the Negombo region on Sri Lanka’s west coast since scores of worshippers were killed in the bombing of the St Sebastian church there on Sunday. Communal tensions have since flared.

Hundreds of Pakistanis fled the port city on Wednesday, crammed into buses organised by community leaders after threats of revenge.

“Because of the bomb blasts and explosions that have taken place here, the local Sri Lankan people have attacked our houses,” Adnan Ali, a Pakistani, told Reuters as he prepared to board a bus.

Pakistan has offered ‘every possible’ assistance to Sri Lanka in investigations into the series of deadly terrorist attacks. At a weekly news briefing on Thursday, foreign office spokesperson Dr Muhammad Faisal said the offer was made at the highest level by Pakistan.

“Pakistan will provide every possible assistance that Sri Lanka requests. This offer of support has been extended by the president, prime minister and the foreign minister to their counterparts in Sri Lanka,” he told reporters.

However, he added, “we have not received any formal request from the Sri Lankan authorities, so far.”  There were reports that Sri Lanka had sought assistance of the Punjab Forensic Laboratory in the aftermath of deadly bombings.

In response to the questions, the spokesperson said, Pakistanis residing in Sri Lanka are safe and there has been no Pakistani fatalities, in the terror attacks.

“Our High Commission in Colombo visited the injured women in hospital and connected them with their families. All possible facilitation is being extended to their families. They are in the process of traveling, as per their requirements.”

About the recent visit of the prime minister to Iran, the spokesperson clarified that Imran’s statement on the use of Pakistani soil was wrong interpreted.

“The statement has been largely taken out of context. Prime Minister Imran Khan was talking about non state actors using Pakistani soil under foreign influence to carry out activities in Pakistan or coordinating from Pakistan, case in point is Commander Kulbushan Jadhav and local facilitators,” Faisal said.

“In the same manner, Pakistan is attacked using soil of Iran and Afghanistan,” he added.

The same was clearly stated by the PM during his visit to Iran while referring to latest incident in Balochistan. “That is why the prime minister is making all out efforts for peace across whole region.”

Faisal stressed that the prime minister’s statement being linked to any other context is an effort to misinterpret the expression which does not serve Pakistan in any way.

To another question, the spokesperson said the Iran-Pakistan gas pipeline did come up for discussions during the prime minister’s visit and that the two sides agreed to implement the project.

He also clarified his recent interview in which he reportedly said that Dr Afia Siddiqi was not willing to return to Pakistan. “The remarks were quoted out of context. We are in touch with Dr Afia and her family and we will continue our efforts to bring her back to Pakistan. We encourage responsible journalism,” he said.

“We continue raising the issue in Islamabad as well as in Washington. We remain engaged with the US authorities.  Our Consul General in Houston regularly visits Dr Afia. The last visit took place on 18 April 2019,” he added.

On Kartarpur Corridor, the spokesperson insisted that Pakistan is committed to the historic initiative taken by Pakistan but blamed India for its unwillingness to schedule the next meeting.

He expressed concerns about deteriorating human rights situation in the Indian occupied Kashmir while denouncing the highhandedness being meted out to Kashmiri leaders including Yasin Malik.