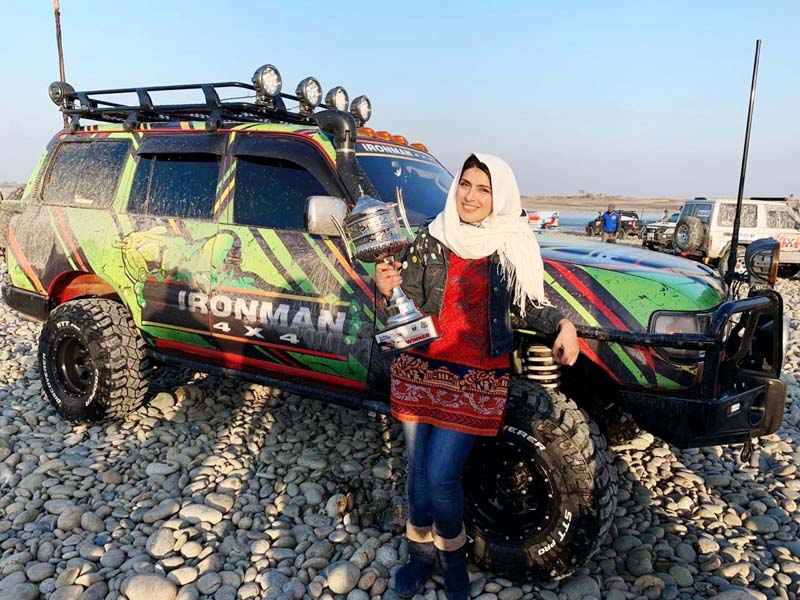 PESHAWAR: There is no doubt that interest in adventurous activities is independent of gender, but when culture and traditions come into the equation, women are not always seen at the forefront.

Nowadays, however, women are breaking stereotypes across Pakistan and are gradually proving their prowess in all fields of life. To that end, women of Khyber-Pakhtunkhwa are not lagging behind, and are exhibiting their interest in adventure and motorsports.

Salma Khan Marwat, hailing from Lakki Marwat District in K-P, has made a name for herself by becoming the first woman to win the Chakwal 4×4 challenge off-road rally, proving that she is one of the fastest racers in the country.

Finishing the race in 22 minutes and nine seconds, Salma not only won the race but also the hearts of thousands of Pakistanis who now look at her as a source of inspiration.

The race was a national-level event and prior to participating in it, Salma had already finished first in the women’s category of another national jeep rally held in Balochistan. She also won the top slot in the annual Indus-Water Cross Rally that took place in Swabi District this year. Not only that, she was also the winner of the 2018 Sarfaranga Jeep Rally held in Skardu.

Though Salma hails from Lakki Marwat, she has been living with her family in Islamabad for the past few years. In addition to motorsports, she is also continuing her academic pursuits and is currently enrolled as an undergraduate student at a university in Islamabad.

Talking to The Express Tribune, Salma not only encouraged other women to pursue their interests but also stressed the crucial role that sports could play in defeating terrorism.

“It had been extremely difficult for women of the tribal areas to come out of their homes but through my participation in adventure sports, I want to portray the peaceful face of our region,” Salma said.

She added that she feels honoured to be a female participant in the 100-kilometre race and win the title because the rallies require a lot of physical strength as they take place in rugged and mountainous regions as well as barren lands and deserts. However, her passion and interest in the sport allowed her to overcome all the challenges.

“I belong to a Pashtun family and owing to our conservative values, I was initially not permitted to participate in sports, but having my mettle proven by bagging first positions in both national and international races, I now have the support of my family.”

Salma added that women should take an interest in recreational activities and stated that adventure sports can provide one with the opportunity to see the entire world.

“[Through the sport], you learn to survive under the toughest circumstances,” she continued.

Salma didn’t enter the world of adventure sports out of the blue as she had a keen interest in sports since she was a kid.

“Until now, I have participated in eight national-level competitions out of which I have won four,” Salma explained with an air of confidence. “The competitions included races extending from 100 kilometres to 110 kilometres.”