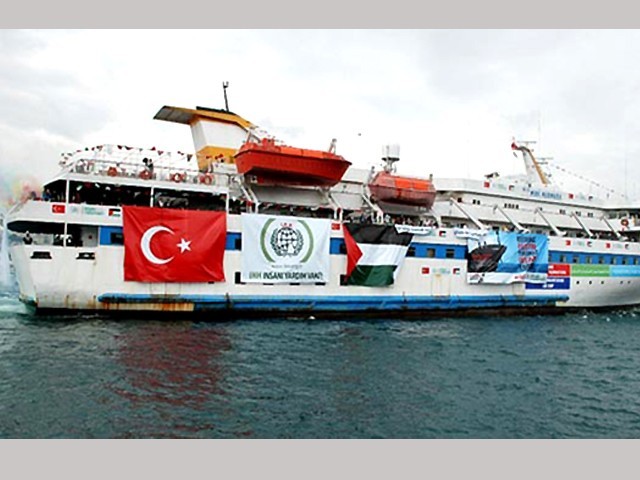 Israel raided an aid flotilla bound for Gaza last year in which nine activists were killed. A new flotilla is due to depart from US bearing supplies for Palestinians in Gaza. PHOTO: AFP

WASHINGTON: United States warned Friday that a pro-Palestinian aid flotilla would be taking “irresponsible and provocative actions” if it carries out plans to break Israel’s naval blockade of Gaza.

The flotilla seeks to mark the anniversary last month of an Israeli commando raid that killed nine Turkish activists aboard a ship that was part of a flotilla trying to break the Israeli-imposed blockade of Gaza.

“We are concerned that a number of groups are organizing a one year ‘anniversary’ flotilla to commemorate the incident by sailing from various European ports to Gaza in the near future,” State Department spokeswoman Victoria Nuland said.

“Groups that seek to break Israel’s maritime blockade of Gaza are taking irresponsible and provocative actions that risk the safety of their passengers,” she said in a statement.

She said such flotillas are not needed to funnel humanitarian aid to Gaza because such assistance can be delivered to the Israeli port of Ashdod, where it “can be offloaded, inspected and transported to Gaza.”

“We urge all those seeking to provide such assistance to the people of Gaza to use these mechanisms, and not to participate in actions like the planned flotilla,” Nuland said.

US Secretary of State Hillary Clinton on Thursday expressed her opposition to the planned flotilla.

“We do not believe that the flotilla is a necessary or useful effort to try to assist the people of Gaza,” the chief US diplomat told reporters.

“Just this week, the Israeli government approved a significant commitment to housing in Gaza. There will be construction materials entering Gaza,” Clinton said.

“And we think that it’s not helpful for there to be flotillas that try to provoke actions by entering into Israeli waters and creating a situation in which the Israelis have the right to defend themselves,” Clinton said.

On May 31, 2010, Israeli commandos killed nine Turkish activists, including one who also had US citizenship, when they boarded a Turkish vessel that was part of a flotilla trying to break the Israeli-imposed blockade of Gaza.

A group of pro-Palestinian activists, led by several Turkish groups, have said they plan to sail within the next few days to Gaza, mainly from Greek ports.