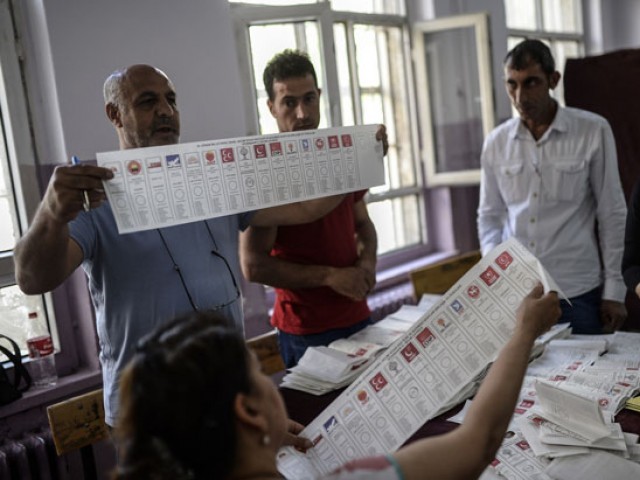 Election officials hold ballot papers with the names of political parties participating in the nationwide legislative election, as they count votes. PHOTO: AFP

However the electoral council, known by its Turkish initials YSK, did accept an “extraordinary” appeal by the ruling Justice and Development Party (AKP) for over 41,000 voters and election officials in Istanbul to be investigated, State news agency Anadolu reported.

Erdogan loyalist and former prime minister Binali Yildirim failed to clinch the Istanbul mayor’s post at the March 31 local elections as voters punished the AKP after being hurt by last year’s currency crisis and double-digit inflation.

The opposition was more unified than in previous elections, with analysts saying the support of Kurdish voters helped the main opposition candidate Ekrem Imamoglu win Istanbul.

The AKP also lost to the opposition in Ankara but remained the most popular political party nationwide in the polls.
The defeat in Istanbul is especially sensitive for Erdogan who made his political career as a successful and popular mayor of the city.

The AKP or its predecessors had held Ankara and Istanbul since 1994.
After a failed 2016 coup against Erdogan, more than 140,000 individuals were sacked or suspended from the public sector, including teachers, over alleged links to coup-plotters.
But the challenge to the validity of sacked public workers’ votes was rejected, Anadolu reported.

The AKP’s wider appeal, for a repeat of the entire Istanbul vote, still awaits a ruling by the YSK.
Imamoglu was given his election mandate last week after defeating Yildirim by around 14,000 votes in Istanbul following days of recounting because of AKP appeals.