Japan to provide over Rs7 billion for health, transport sectors

Japan to provide over Rs7 billion for health, transport sectors 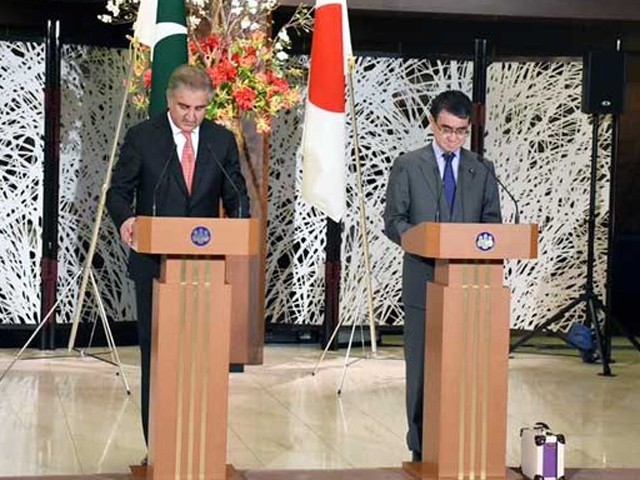 Japan on Tuesday agreed to provide over Rs7 billion for Pakistan’s health and transport sectors during Foreign Minister Shah Mahmood Qureshi’s three-day official visit to Tokyo at the invitation of his counterpart Taro Kono.

The visit has provided an opportunity to further build on the momentum of recent high level visits between the two countries, according to a statement issued by the Foreign Office.

Two MoUs relating to aid projects were signed between the two countries, according to which Tokyo will invest Rs7.4 billion in health and transport sectors. Rs4.85 billion will be given for extension of intensive care maternal and child health care centre and children’s hospital at PIMS in Islamabad and Rs2.55 billion for strengthening inspection capability of inland transportation cargo.

Foreign Minister Qureshi also urged Japanese companies to benefit from Pakistan’s special economic zones (SEZs) to cater the needs of not only local but also regional markets in a one on one meeting with his Japanese counterpart, which was followed by delegation level talks and a joint press briefing.

The two sides reviewed the entire spectrum of bilateral relations and identified areas for further cooperation in political, economic, trade, investment, education and cultural fields, according to the statement.

The foreign minister appreciated Japan’s role as Pakistan’s key development partner over the years and highlighted the areas of investment, human resource development, information technology, tourism and agriculture had potential to further deepen through mutually beneficial cooperation. The foreign minister also stressed that Pakistan with its geographical location at the cusp of the Middle East and Central Asia had the potential to become a manufacturing hub for Japanese companies.

While discussing the regional issues, Qureshi briefed FM Kono on Pakistan’s constructive role in Afghanistan aimed at peace and reconciliation, outreach efforts by the government with its eastern neighbour and deteriorating situation of human rights in the Indian Occupied Kashmir.

Minister Kono appreciated Pakistan’s efforts for peace and stability in the region. He termed the recent signing of the Memorandum of Cooperation on the Technical Internship Training Programme (TITP) as an important step towards entry of young Pakistani skilled workers to the vast and vibrant market of Japan.

Appreciating Japan’s role as premier development partner of Pakistan, the foreign minister said the country was ready to welcome Japanese investors in all sectors of economy. He, while conveying the special message of greetings and well wishes for the people and government of Japan on behalf of Prime Minister Imran Khan, invited Prime Minister Abe to visit Pakistan.

FM Qureshi said both countries had also agreed to continue joint efforts for peace and stability in the region.

Aso assured that the government of Japan would continue to contribute in trade and investment opportunities in Pakistan. He said both sides also exchanged views on the current developments in the region and reaffirmed their commitment to promote the goals of peace and prosperity of the region.