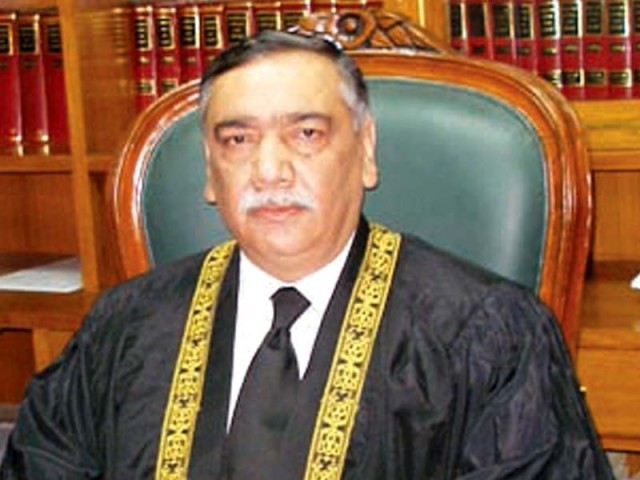 ISLAMABAD / RAWALPINDI: Chief Justice of Pakistan (CJP) Asif Saeed Khan Khosa Monday observed that there were a number of recurring cases where fake testimonies were presented before the court.

He made this observation while hearing an appeal filed by Shahid Hameed, who was convicted in a murder case.

CJP Khosa said that asking for evidence was a basic part of adjudication and law but it was rarely abided by in this country. Many cases in this country were presented without any tangible evidence and were heavily reliant on eye witness testimony. This is now provided to be a faulty procedure and needs to be corrected.

The CJP said one of the witnesses of this case was a patwari by profession who was deployed in Lahore and Shiekhpura. Due to the specific nature of the position and posting the CJP questioned how would he provide testimony that was relevant.

He ruled that the prosecution had failed to provide concrete evidence and acquited the suspect.

The CJP remarked what should be done with the patwaris who gave fake testimonies.  At this, the suspect’s counsel said Ghazanfar should be pardoned.

The suspect was accused of murdering Muhammad Usman in 2009 and the factory area police in Sheikhpura registered the case against him.

The trial court had sentenced Ghazanfar to death. But a high court hearing his appeal had converted the sentence to one of life imprisonment.

The Rawalpindi District Bar Association on Monday boycotted the court of Civil Judge Shagufta Sabir for sentencing a lawyer for contempt of court.

The Bar Association said they reserved the right to respond if the judge dismissed any of their cases on non- appearance.

Bar Secretary Shehzad Mir said it was a principled decision and the Chief Justice should immediately issue orders to transfer the judge.

He said that the police had arrested him based on fake eye witness testimonies. He complained that lower courts rarely review the evidence available and almost wholly rely on testimonies.

He urged that the high court set aside the sentence.