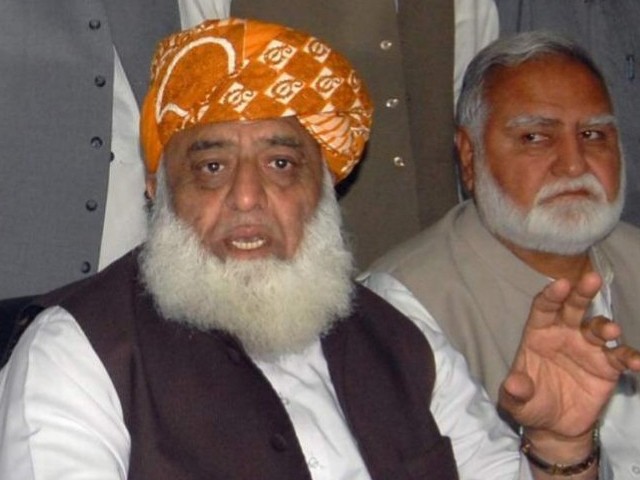 PESHAWAR: Maulana Fazlur Rehman, the leader of his own faction of the Jamiat Ulema-e-Islam (JUI-F), warned on Saturday that his party would lock down the federal capital if the Pakistan Tehreek-e-Insaf (PTI) government did not step down.

“We demand that fresh elections should be held in the country,” the JUI-F chief told reporters after a meeting of the Muttahida Majlis–e–Amal (MMA), an alliance of religious parties.

Fazl, who is also the president of the MMA, said all opposition parties were on the same page on holding fresh elections.

He added that the country was stuck in economic and political crises for the last eight months.

“The country is being run by a few selected technocrats and the minister [Asad Umar] failed to present the annual budget,” Fazl maintained.

“Now an International Monetary Fund (IMF) budget would be presented instead of that of the government,” he added.

The JUI-F leader claimed that people had lost billions of rupees in the stock market during the last eight months because of the government’s economic policies.

He also demanded an inquiry into the Bus Rapid Transit (BRT) project in Peshawar. “The project which was estimated to cost Rs30 billion has now touched Rs100 billion,” he noted.

“The National Accountability Bureau (NAB) has been rounding up politicians belonging to opposition parties, while the minister and officials responsible for the BRT fiasco are roaming free.”

Fazl pointed out that the PTI did not have its own ministers and had chosen people who were part of the government during Pakistan Peoples Party’s (PPP) tenure for the job.

“The current government lacks the ability to pull the country out of its crises,” he added.

The JUI-F chief noted that the presidential form of government was a symbol of dictatorship and such measures should be avoided.