Around a dozen foreig­n navies are also taking part in next week's parade­
By Reuters
Published: April 20, 2019
Tweet Email 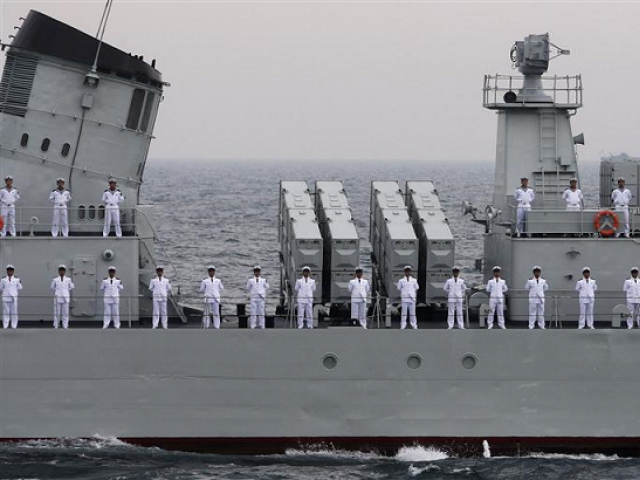 Around a dozen foreign navies are also taking part in next week's parade. PHOTO: REUTERS

QINGDAO, CHINA: China will show off new warships including nuclear submarines and destroyers at a parade next week marking 70 years since its navy’s founding, a senior commander said on Saturday, as Beijing flexes its increasingly well-equipped military muscle.

President Xi Jinping is overseeing a sweeping plan to refurbish the People’s Liberation Army (PLA) by developing everything from stealth jets to aircraft carriers as China ramps up its presence in the South China Sea and around self-ruled Taiwan.

The navy has been a key beneficiary of the modernisation plan as China looks to project power far from the country’s shores and protect its trading routes and citizens overseas.

Last month, Beijing unveiled a target of 7.5 per cent rise in defense spending for this year, a slower rate than last year but still outpacing China’s economic growth target.

Deputy naval commander Qiu Yanpeng told reporters in the eastern city of Qingdao that Tuesday’s naval parade – likely to be overseen by Xi himself, though China has not confirmed that – will feature 32 vessels and 39 aircraft.

“The PLA Navy ship and aircraft to be revealed are the Liaoning aircraft carrier, new types of nuclear submarines, new types of destroyers, as well as fighter aircraft,” Qiu said, without giving details. “Some ships will be revealed for the first time.”

The Liaoning, the country’s first carrier, was bought second-hand from Ukraine in 1998 and refitted in China.

It’s not clear if China’s second carrier, an as-yet unnamed ship developed and built purely in China, will also take part, but in the past few days state media has run stories praising recent sea trials.

Around a dozen foreign navies are also taking part. While Qiu did not give an exact number, China has announced the parade would include ships from Russia, Singapore, India, Thailand and Vietnam – which frequently complains of Chinese military activity in the disputed South China Sea.

China’s last naval battles were with the Vietnamese in the South China Sea, in 1974 and 1988, though these were relatively minor skirmishes.

Qiu reiterated China’s frequent stance that its armed forces are not a threat to anyone and that no matter what happens it will never “pursue hegemony”.

“It is fair to say that the PLA Navy has not brought war or turbulence to any place,” Qiu said.

But China has been scared by its past and needs good defenses at sea, he added.

“A strong navy is essential for building a strong maritime country,” Qiu said. “From 1840 to 1949, China was invaded by foreign powers from the sea more than 470 times, which caused untold suffering and deep wounds to the Chinese nation.”

China has frequently had to rebuff concerns about its military intentions, especially as military spending continues to scale new heights.

Beijing says it has nothing to hide, and has invited foreign media to cover next week’s naval parade and related activities, including a keynote speech by navy chief Shen Jinlong, who is close to Xi.

Zhang Junshe, a researcher at the PLA’s Naval Research Academy, told reporters after Qiu had spoken that inviting foreign navies to take part in the parade was a sign of China’s openness and self-confidence, noting China had also done this for the 60th anniversary in 2009.

“New nuclear submarines and new warships will be shown – this further goes to show that China’s navy is open and transparent,” said Zhang.