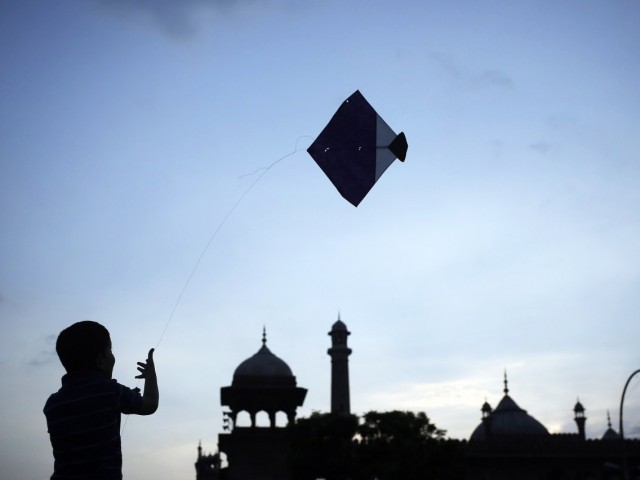 LAHORE: As kite strings cause serious injuries to three more people in the provincial metropolis, there is seemingly no end to this potentially fatal menace.

On Wednesday, two young motorcyclists, identified as Ahmad Ehsan from the Factory Area and Zahid Hanif of Nishter Colony, were riding on a bike when they were suddenly knocked off the two-wheeler.

A kite string cut their throats in the darkness and they suffered injuries. The victims were shifted to Lahore General Hospital for treatment. This incident arrives on the coattails of another which occurred on Sunday when a 28-year-old man was injured by a kite string in Youhanabad on Sunday.

As with the preceding years, kite strings have claimed several victims and casualties caused by such incidents are being reported once a week or on a biweekly basis.

In the first week of April, a victim identified as Farhan was riding a bike when a kite string ran through his neck. The victim was admitted to the Lahore General Hospital for treatment and the family protested against the incident. They demanded strict action against the perpetrators.

Such incidents, few even worse, have consistently been reported in the previous as well.

In March 2018, 40-year-old Shoaib Younad was killed after a kite string slit his throat. Just a week before this case, three-year-old Makrukh had her throat slit by a kite string while returned home from school in Shera Kot.

Her father and brother were also injured in the incident. In September last year, a 30-year-old man died after his throat was slit by a kite string in Bhatti Gate. The victim, identified as Muhammad Faisal, was travelling on his bike when the incident occurred.

Two years ago, in March 2017, a 22-year-old man was similarly injured in Shera Kot. Once again, Abdul Rauf was travelling on his motorcycle when a stray kite string cut his throat near Outfall Road. In January of the same year, a minor girl was injured in Harbanspura. The victim, identified as Sana, was riding on a motorbike with her uncle when she suffered a head injury caused by a kite string.

The previous PML-N government and current regime expressed a zero-tolerance policy towards kite flying. Former chief minister Shehbaz Sharif was no stranger to even suspending area officers if a kite flying incident was reported from a locality. He also suspended senior officers, including the DSP and SP, in the case of injury to three year old Mahrukh in Shera Kot. Dozens of SHOs were suspended over their failure to control kite flying throughout Punjab.
After taking charge, Punjab Chief Minister Usman Buzdar has also repeatedly issued instructions to show a zero-tolerance policy towards the matter.
As far as on-the-ground ground level measures by the police were concerned, the department worked in two ways to curb the sport. First, it would take legal action, including arrest and registering of FIRs, against kite makers and flyers. For example, Lahore Police claim to have arrested 2,806 accused persons in 2,626 cases over the last three months. City Division arrested 518, Cantt Division 933, Civil Lines 128, Sadar Division 219, Iqbal Town 208 and Modal Town Division 800 during the period.
DIG Operations Lahore Muhammad Waqas Nazir, in a statement on the matter, has said the force has also extended its cooperation to the district administration to crack down on kite making factories. The officer said he has issued instructions to divisional SPs to create special monitoring teams to ensure the ban on kite flying.
He has asked SPs to send daily reports to his office on the crackdown against kite flying.
Secondly, the police would propagate against the dangerous sport through banners, flexes, announcements from mosques and other means.
Despite all these efforts, however, the recurrence of such incidents has proved that authorities are currently unable to control the menace in the city.

Basant has been a centuries-old cultural festival of Lahore, in particular, and Punjab, in general. It was celebrated to welcome the spring season.

It was so deeply embedded in the culture of Lahore that almost every house would celebrate it. Musical gatherings, dance, food and melas were part of the celebrations that continued for weeks and months. The main trend of all the festivities related to Basant was kite flying. However, the introduction of harmful kite strings affected the event to such an extent that it is fast fading in the memory of locals.

For over a decade, the government banned kite-flying after wires damaged by kites caused power breakdowns and there were reports of locals’ throats being slit by the strings.

The injuries and fatalities started occurring when a new form of kite string, using metal and refined plastic coated with chemicals, was introduced in the market. The metal kite string, after coming into contact with electric wires, would cause sparks and lead to power outages. Also, kite string, using plastic coating, would act likes a clothesline and knock bikers off their two-wheelers.
A huge portion of incidents were reported during the time and caused a public uproar, prompting authorities to ban kite activity.

Major reshuffle in Punjab police dept on the cards