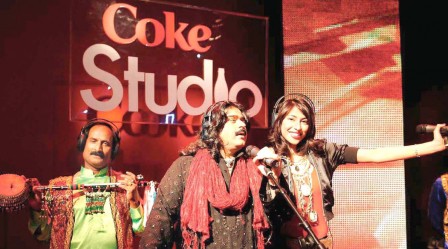 Arif Lohar and Meesha Shafi put in a sensational performance for the first episode of Coke Studio. PHOTO: KOHI MARRI

But the real shocker of the night was how fantastic the Arif Lohar-Meesha Shafi collaboration, “Alif Allah Chambay Di Booti” was. The idea of combining one musical powerhouse – Arif Lohar (who an entire generation of young Pakistanis grew up seeing almost daily on Pakistan Television) and the edgy, young Meesha Shafi, was bound to be either very, very good, or very, very bad.

It turned into a win-win situation. Shafi managed to show off that she has remarkably strong vocals and held her own against Lohar, who reminded why exactly he was – and is – a musical powerhouse. Their song has garnered more hits on YouTube than any of the others featured on the episode, and was an exemplary fusion of Lohar’s signature use of chimtas and the “Jugni” chorus.

Gumby told The Express Tribune last month that Meesha Shafi was the biggest surprise of the season for him, since he had never imagined how powerful her voice could be.

Meesha Shafi got the same reaction from musician Ali Noor, who posted on Twitter: “Listening to ‘Alif Allah’ on repeat … goose bumps are not going away … Meesha Shafi is the next big thing man … way to go CS!”

Even though the show was airing simultaneously on multiple television channels, the Coke Studio website was unavailable 45 minutes into the show.

The other strong point of the show was Arieb Azhar’s powerful recitation of poetry by Bulleh Shah, “Na Raindee Hai”, which the backing vocalists contributed to with a haunting chorus. The trippy vibe to the song, combined with its dark undertones and Azhar’s expressive voice, speaks volumes about Rohail Hyatt’s vision as a producer.

Zeb and Haniya’s groovy rendition of the Dari song, “Bibi Sanam Janem”, featured the rubab and like “Paimona Bitte”, they managed to make the popular tune and unfamiliar words into a beautiful, catchy song.

While Abida Parveen was consistent with “Ramooz-e-Ishq”, Karavan’s debut was mistimed, since the mellow “Yaadein” was an immediate downer after “Alif Allah Chambay Di Booti”.

Lohar told The Express Tribune that he hoped Pakistanis would look at the show and realise “kuch bata nahi, sab aik hai” (nothing has divided, we’re all one).

At the very least, Lohar managed to unite hundreds of Pakistanis in front of their television screens, spellbound by the magic created by the team behind Coke Studio.

Lollywood disappointed by the budget