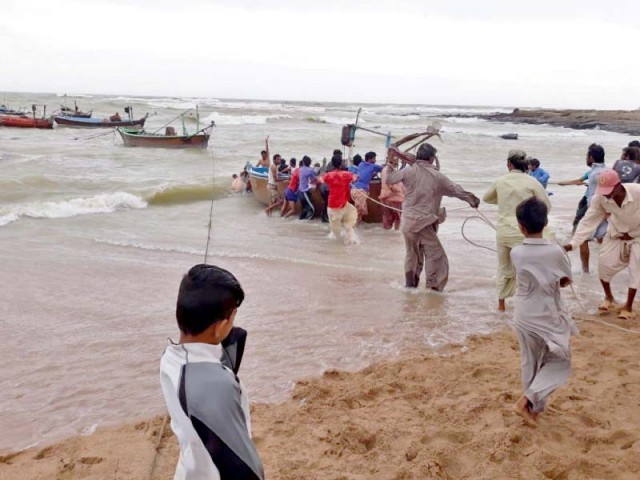 Fisher folk at the Mubarak Village struggle to bring their boats to the shore after the storm. Winds blowing from the western system left destruction in their wake, causing boats to collide, capsize and drown. PHOTO: EXPRESS

KARACHI: The strong winds blowing from the Western system on Sunday caused high tides and a sea storm which in turn have left the fisher folk community devastated. At least 12 fishing boats of varying sizes remain missing while 13 large boats and four small ones have reportedly drowned. The search and rescue operation to find the missing boats continued on Wednesday. According to the Fishermen’s Cooperative Society (FCS), at least 32 fishermen are still missing.

The search and rescue operations have been under way since the past four days. The 11 fishermen on board a boat named Safina Al-Jillani which had left the shore on April 8 returned on Wednesday after being caught in the storm for four days. The body of another fisherman who was on board a small launch, Al-Ramzan, has also been recovered from the sea. Pakistan Navy, Pakistan Maritime Security Agency and helicopters of Edhi Foundation participated in the search and rescue operation.

Search on for 32 fishermen lost after deep sea storm

Hundreds of boats, which had set-off for 15 to 30-day fishing excursions met with difficult circumstances due to the sea storm. The communication network between the Karachi Fish Harbour, Ibrahim Hyderi and Upper Sindh was unable to connect with dozens of boats from Badin and Thatta due to the strong winds which have prevailed since Sunday. Fishing boats, big and small, have begun arriving at different jetties either through ad hoc efforts or via help from other boats which had managed to find shelter at different places when the storm was calm. However, several large and small boats have drowned due to the stormy weather.

According to FCS and Karachi Fish Harbour’s emergency centre representative Nasir Buneri, the boats were restricted from setting off in the sea since Friday, April 12, in light of the weather alert issued by the meteorological department with regards to the Western system. He said that the boats that had set off between April 1 and April 8 were, however, stranded at sea due to the extraordinary weather conditions.

Buneri said that a 24-hour emergency and response centre located at the fish harbour has been monitoring the situation while fishermen have been warned against heading out in the sea through announcements via megaphones and loud speakers.

Although 11 fishermen from launch Safina Al-Jilani have returned, many others remain lost at sea. The body of a fisherman who was among those missing has been recovered.

No traces of another launch named Fazal Akbar have been found despite a three-day search operation. There are 18 fishermen including the captain, on-board the Fazal Akbar.

Yet another launch, Bismillah, which was out at sea, has five fishermen out of 14 missing while nine have been rescued. Al-Aziz had 15 fishermen on-board, of whom 12 have returned while three remain missing. On Tuesday, 12 out of the 14 men on-board Al-Mudassir were rescued but two remain missing. Besides, eight crew members on-board the Al-Zulfiqar and six fishermen from the Al-Ramzan remain missing.

The process of shifting the rescued fishermen and the recovered boats to Karachi is under way. Nearby coastal areas, including Ghorabari, Kharochan and Khoikhadi were searched during the rescue operation.

The deceased fisherman was identified as Noor Islam. He was from Korangi and had been on board the Al-Ramzan boat. Of those who had accompanied him, three have returned safely.

FCS Chairperson Hafiz Abdul Barr said that all possible sources were used to warn fishermen from Mubarak Village till Keti Bandar of the emergency situation. However, losses have been incurred due to the severity of the storm. He added that rescue operation is still under way.