Moment occurr­ed when the Duches­s of Sussex was at the Nation­al Theatr­e on London's South Bank
By News Desk
Published: April 17, 2019
Tweet Email 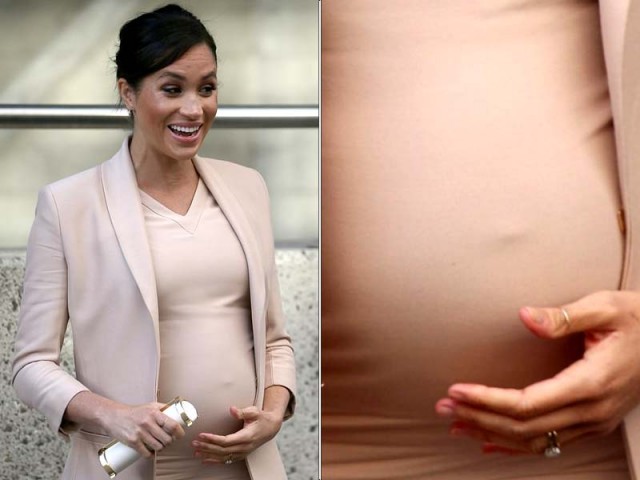 Moment occurred when the Duchess of Sussex was at the National Theatre on London's South Bank.PHOTO: MAIL ONLINE

Royal fans were ecstatic over the Dutchess of Sussex Meghan Markle could feel her unborn child kicking her during one of her public engagements, Mail Online reported.

The moment occurred when the Duchess of Sussex was at the  National Theatre on London’s South Bank in January – during her first official visit since succeeding the Queen as its royal patron.

Francesca, who runs the Duke and Duchess of Sussex fan account @harry_meghan_updates on Instagram, took to Instagram stories to reveal the moment when a little hand or foot appeared to poke Meghan’s belly.

The moment she shared was when Meghan visited the National Theatre at the end of January.

The video shows the Duchess holding her belly and turning slightly to the side – as she does a close up of belly shows something moving.

The imprint could have been a hand or a foot kicking and with Meghan’s expression in the photo it could also confirm that she felt the baby kick.

As the fan account shared the clip they said, “We saw your little foot or hand!You’re a very active little one!Here you said hello during your mum’s visit to the National Theatre.”

During her visit Meghan joined a workshop with members of the Pericles production before meeting apprentices working as technicians in different departments from carpentry to metalwork and painting.

The fan account @harry_meghan_updates mentioned the moment at the time but this is the first time they have shared the video.

Of course this isn’t the first time she’s felt a kick in public –  the account also shared another video of Meghan when she visited a Bristol charity.

As Meghan held her bump and spoke to someone at the charity she looked shocked then looked down at her belly.

The fan account posted the cute video at the time saying,”WOW! Look at this! The precious moment Baby Sussex kicked Meghan’s lungs out of her. He/she really wants to come out to meet us people! No wonder mummy needs to hold to calm.”

Fans were thrilled to see the adorable footage at the time with one commenting,”That was such a huge kick… I just can’t wait for the baby to be born.”

There has been much speculation around the Duchess birth.  Last week it was revealed that she is using yoga and meditation to prepare for a home water birth.

The couple were also said to have taken a “personal decision” to maintain a high level of privacy around the birth of their first child, which is expected in the very near future.

And the birth will not be announced until the new family have spent time with their newborn and celebrated the birth in private.

The video can be seen here