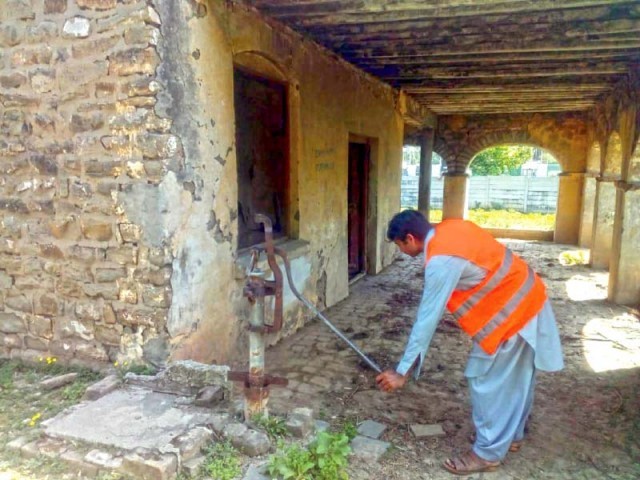 RAWALPINDI: Next to the Judicial Complex and Jinnah Park lies a stretch of land packed with history. A non-descript graveyard to the common eye, few know the significance it holds to the story of both Pakistan and India –it is the final abode of countless freedom fighters who lost their lives resisting British rule in the Sub-Continent.

“This is the oldest graveyard in Rawalpindi,” said Zahid Ahmed, the caretaker of the 162-year-old cemetery which was once part of the old Central Jail in the garrison city.

“But I believe 98 per cent of Pakistanis do not even know of its existence.”

“This graveyard is home to the remains of unknown heroes from the freedom struggle,” he said. “When the British executed freedom fighters, arrested from all over United India in Rawalpindi Jail, they used to bury them here.” According to Ahmed, some of these freedom fighters were buried in mass graves.

“They were piled one over the other, many of them still handcuffed and chained in death,” he said.

Traces of most of these, however, have almost completely vanished due to neglect and lack of maintenance, Ahmed added. “Only a few graves still have headstones. Most can only be recognised as graves due to earth mounds.”

The cemetery itself looks more like a filth depot, he said. “Especially when it rains, the entire graveyard is inundated for days, further damaging the graves.” Even after caretaking duties of the graveyard were handed over to the Edhi Foundation in 2000, there was no improvement in the graveyard’s condition.

“The foundation’s role was limited only to burials,” said Ahmed.

Among the few eye-catching features at the graveyard is a mortuary that dates back to the Mughal era and exudes both eeriness and grandeur. Inside is a huge, well-ventilated hall, a four feet high plinth and a 12-foot-long passage where guards once used to sit.

Under the British and then Pakistani authorities, the mortuary served as a government post mortem centre to before the establishment of a district headquarters hospital.  However, that too now is home only to insects and lizards.

When asked about some graves that appeared smaller than others, Ahmed said they mostly belonged to children born to women who were imprisoned in the old jail and died during their mothers’ incarceration. Some others belonged to the children of Jail Colony residents, he added.

In addition to unnamed freedom struggle heroes, the cemetery also contains the graves of terrorists killed in encounters with military and law enforcement agencies, and suicide bombers, Ahmed said.

“This is a prohibited area, you see. As such, this is perhaps the only graveyard in Pakistan where no vigils are held or prayers offered, even on Eidul Fitr,” he said. “Nowadays, graves here are prepared as soon as information from police received. No funeral prayers are offered. Bodies are buried straight from the vehicles they arrive in,” he added.

In addition to those killed in encounters, the graveyard is also used to temporarily bury bodies as yet unidentified, such as those of accident victims, the caretaker said. “Such graves usually disappear within three years. The graves which such bodies are buried in are tagged so that families can identify them.”

“Upon identification, bodies are handed over to families after two to four months after they obtain the deputy commissioner’s permission,” Ahmed told The Express Tribune. “In a few cases though, bodies are not exhumed if doctors conclude that they are in too poor a condition.”

According to Ahmed, the last burial took place four months ago, although he pointed out that the cemetery is almost out of space. “More than 2,000 bodies have been buried here over a period of more than century and a half,” he said. “Still, burials here continue.”