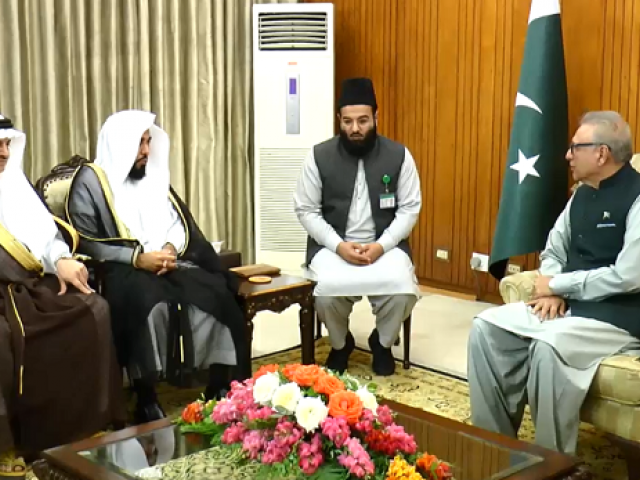 The grand Imam, who arrived in Islamabad on Thursday on a five-day visit, called on the president at Aiwan-e-Sadr.

President Alvi reiterated the shared bonds of history, culture, traditions, faith and values between both the countries.

Recalling the successful visit of the Crown Prince His Royal Highness Prince Muhammad Bin Salman to Pakistan, the president said the crown prince had won the hearts of Pakistanis by his generous offer of support to the community.

He also showed appreciation Saudi Arabia for its support to Pakistani pilgrims visiting the Kingdom for Hajj and Umrah every year.

He also welcomed the Kingdom’s decision to increase Hajj quota for Pakistan to 200,000 and the inclusion of Pakistan in its ‘Road to Mecca initiative. President Alvi hoped that the project will be extended to all Pakistani airports for Hajj in 2020.

The president pointed out that the large Pakistani community in Saudi Arabia is a strong people-to-people bridge between the two countries.

The grand Imam stated that the relationship of Pakistan and Saudi Arabia is not merely a diplomatic one but it is a relationship based on faith.