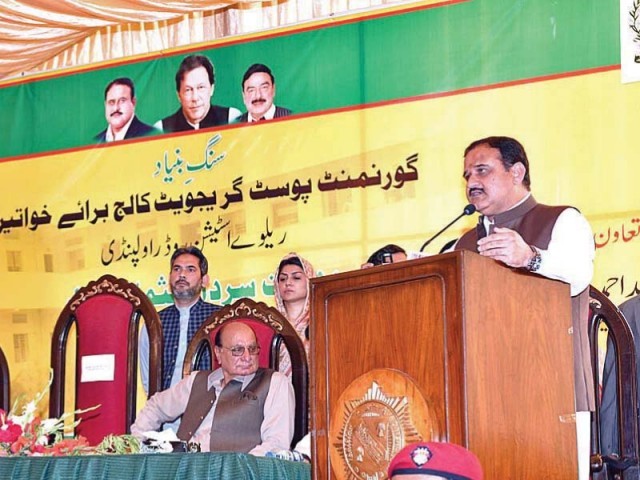 Punjab Chief Minister Usman Buzdar addresses a ceremony to lay the foundation for the Government Post-Graduate College for Women on Railway Station Road in the city. PHOTO: APP

RAWALPINDI: The Punjab Chief Minister Usman Buzdar on Friday announced a Rs120.2 billion development package for Rawalpindi as he upgraded the Government Postgraduate College in Satellite Town to the status of a university.

The development package includes Rs70 billion for the construction of the 23-kilometres-long signal-free Leh Expressway and the Rs50 billion Rawalpindi Ring Road project.

A further Rs60 million will be spent on upgrading the Post Graduate College for Girls on Railway Station Road, Rs70 million each will on building the Rahimabad and Dhoke Dalal Gulzar degree colleges.

When he stood up to speak to the audience at the newly crowned university, all the students and teachers in the hall stood up and gave him a standing ovation for two minutes.

CM Buzdar stated that by upgrading the college to the status of a university, Punjab could now boast having 40 universities.

“You are the guarantee of the bright future of Pakistan and you will make the country great and greater. It’s our job to provide the best resources and we will continue doing this job,” Buzdar said while addressing the students.

He went on to promise that his government will not allow the university to run out of funds.

Buzdar also credited the federal railway’s minister for successfully building a case to upgrade the college to a university.

“We will make the Pakistan of Quaid’s dreams,” he said, adding that they will not talk but practically demonstrate their claims.

The CM said that they will be building the Rs70 billion, signal-free Nullah Leh Expressway on public-private partnership. The 23-kilometre-long dual expressway, Buzdar said, will also help put an end to flooding in the city during the monsoon season.

Buzdar added that the Rawalpindi Cardiology Centre will also be upgraded to a Cardiovascular Diseases Centre. He added that work on the Rs50 billion Ring Road project in the city will begin soon, noting that the project will change the destiny of Rawalpindi.

“In a few days, the entire framework of the ring road project will come to light,” he said, adding that work on the Mother and Child Hospital has also started.

The Punjab chief minister added that they have started the process of distributing the Insaf Sehat card — the health insurance scheme of the federal government.

The Punjab chief minister added that they aim to turn Rawalpindi into one of the most beautiful cities in the province. For this purpose, he said that the Parks and Horticultural Authority (PHA) has been instructed to devise and execute plans to improve the beauty of the city.

Buzdar said that he will return to Rawalpindi after a month and that within this month, people will “see a changed, more beautiful city”.

The provincial chief executive further disclosed that a draft for the new local government system has been prepared and it will be presented in the next session of the Punjab assembly for approval.

Giving details of the proposed local administration system, Buzdar said that authority will actually be transferred to the lower levels and that some 22,000 village councils and 182 municipal committees will be created who will be empowered to resolve the public’s issues.

He added that more than Rs40 billion will be provided to village councils which will be spent on local welfare.

He also took aim at Pakistan Muslim League-Nawaz (PML-N) President Shahbaz Sharif, stating that his administration will spend more in a year than the money spent by Shahbaz’s provincial government in the city over the past decade.

The university’s first Vice Chancellor Alia Sohail proclaimed that the new university will one day become one of the best universities in the world.

“Its professors will be extremely professional while the university’s students are hard-working,” she said and thanked Punjab Chief Minister Buzdar and Federal Railways Minister Ahmad for approving the status of university for the college.

“Our institution has been fully meeting the parameters of a university for the past decade,” she said, adding that they have “no shortage of space” with the campus spread over 160 kanals of land.

Sohail further said that every year their students secure the top position in exams held by the affiliated university.

“Today, we have gotten our right.”

Ahmad reiterated his decision to dedicate his iconic Rawalpindi mansion Lal Haveli for the university. He further said that he had met with the army chief four times over the construction of the Nullah Leh Expressway and thanked him for his cooperation.

Earlier on Friday, Buzdar had arrived in the city aboard a train from Lahore while accompanied by Federal Minister for Railways and Rawalpindi native Sheikh Rashid Ahmad. Arriving in the city, the red carpet was rolled out for him at the Rawalpindi railway station.

As he entered the lounge, Railway Police officers presented him with a guard of honour.