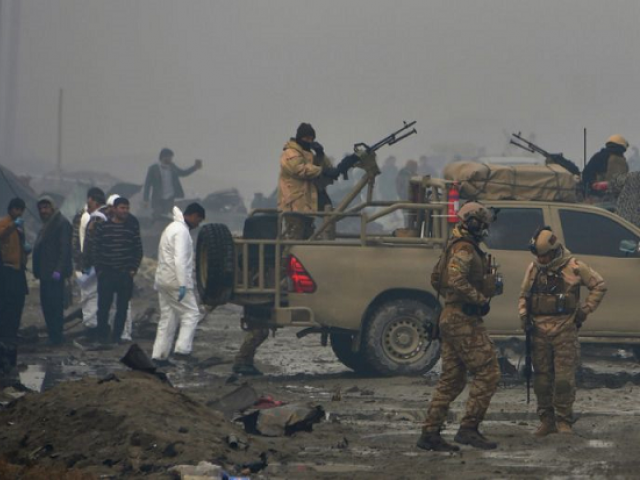 Kabul suffered horrific bloodshed in 2018, but has in recent weeks enjoyed something of a lull in violence. PHOTO: AFP

KABUL: The Taliban on Friday announced their annual spring offensive, which comes as the US and Afghan politicians try to negotiate a peace settlement with the militant group.

Operation Fath – meaning “victory” in Arabic – will be conducted across Afghanistan with the aim of “eradicating occupation” and “cleansing our Muslim homeland from invasion and corruption”, the Taliban said in a statement.

The spring offensive traditionally marks the start of the so-called fighting season, though the announcement is largely symbolic as in recent winters the Taliban have continued fighting Afghan and US forces.

Taliban announce ‘ban’ on Red Cross, WHO in Afghanistan

“Our Jihadi obligation has not yet ended,” the Taliban said.

“Even as large parts of our homeland have been freed from the enemy, yet the foreign occupying forces continue exercising military and political influence in our Islamic country.”

Qais Mangal, a spokesperson for the Afghan Ministry of Defence, dismissed the Taliban’s spring offensive as “mere propaganda.”

“The Taliban will not reach their vicious goals and their operations will be defeated like previous years,” Mangal said.

After suffering horrific bloodshed in 2018, Kabul has in recent weeks enjoyed something of a lull in violence.

But on Monday three US Marines were killed in a Taliban blast at Bagram air base north of the city, and authorities in the capital are on high alert for new attacks.

The administration of President Ashraf Ghani recently declared its own spring offensive, Operation Khalid, and the Taliban used that announcement as a justification for launching a new push.

It shows “the enemy still seeks to attain its malicious objectives through the use of force”, the Taliban said.

The US has held several rounds of talks with the Taliban in a bid to bring an end to the war against the insurgents.

Separately, Afghan politicians have also met with the Taliban in Moscow.

A fresh round of talks is expected to take place later this month between Afghan political leaders, including some officials from the Kabul government, and the Taliban in the Qatari capital Doha.

The Taliban have long refused to speak officially with Kabul, dubbing the government a “puppet” of the West, and the militants have insisted that government officials are attending only in a “personal capacity”.

The Taliban “want to enter the talks from the position of strength. Their operations are to challenge the government, and they want to have the upper hand,” Amarkhail told AFP.

He predicted “intense” fighting for 2019, with the renewed bloodshed taking a toll on civilians.

In 2018, a record 10,993 civilians were wounded or killed in Afghanistan, according to UN figures, and several thousand Afghan police and soldiers are dying each year.

Fed up with the $45 billion annual price tag and what his military leaders termed a “stalemate”, US President Donald Trump last year decided to slash the number of American soldiers in Afghanistan.

No such drawdown has happened yet and the US still has about 14,000 troops in the country, nearly 18 years after the US-led invasion to topple the Taliban.

While Western forces quickly ousted the group in late 2001, the insurgents went on to regroup and over the years have reclaimed much of Afghanistan, primarily in rural areas.

Many Afghans are worried that in America’s push for a settlement, concerns for human rights and democracy will ultimately be cast aside and the Taliban will return to power and reimpose their extreme version of Sharia law.

Trump, in talks with South Korea’s Moon, says sanctions on North Korea to stay in place