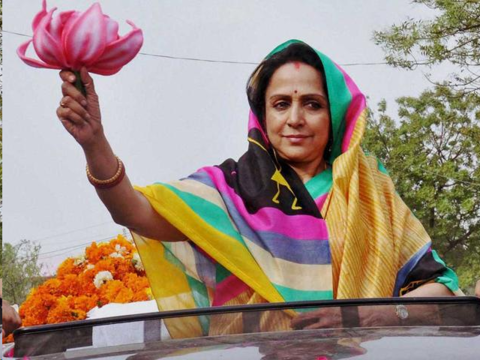 Bollywood superstar Hema Malini’s current poll campaign has become the talk of the town. Pictures from the campaign have quickly gone viral on social media, but not for the right reasons.

The star - popularly known as ‘Dream Girl’ - is running for elections from the constituency of Mathura, in Uttar Pradesh. However, she has received a lot of backlash for using farm equipment as props while her pictures are being taken, reported Gulf News.

From pretending to harvest crops to posing with a sickle, the pictures have become a source of entertainment for many.

In a video posted online, the Sholay actor is seen stepping out of a helicopter only to get out and sit in her fancy car. However, before she sits, she is seen complaining about the fact that the car is too small and whether there is a bigger car that she can sit it. The team then quickly scramble to arrange for an SUV.

Malini finally sits in the passenger seat but quickly steps out, asking someone to fix the seat first. She then returns to the car asking the organisers how long it will take to reach the event she is scheduled for. She is heard saying, “No road shows. You’ll take me straight to the stage otherwise I will come back. I’ve got so many other things to do”


“This is #HemaMalini for you. If we keep giving votes for such people, they will keep coming in helicopters and wave their hands and leave. They will never try to understand the ground reality. #LokSabhaElections2019”

This is #HemaMalini for you. If we keep giving vote for such people they will keep coming in helicopters and wave their hand and leave. They will never try to understand the ground reality. #LokSabhaElections2019 pic.twitter.com/Ia26lQ0bp1

After all this drama, Twitter has gone crazy. Numerous people began trolling the actor and mocking her.

Acting all Hema Malini can do https://t.co/sh5aWzBs6G

Hema Malini’s campaigning is going to keep us all entertained it seems. Though just what is happening in this pic 🤔 #elections pic.twitter.com/9FGlOceinF

A Mercedes, an unbrella, bouncers and spotboys -- the story of Hema Malini's campaign in Mathura. I went to cover pic.twitter.com/ILumiygvf1

Gave to get cheat notes as well. What kind of MP who doesn’t know about her constituency. Aloo factory .. but Hema Malini is a mashed potato @dreamgirlhema pic.twitter.com/tu9PRoVyA7


In another video shared by the same person, the actor can be seen unable to provide any details of how much she has done for the constituency in the past five years. He wrote, “Not even in one interview was she able to tell the things she has done for her constituency. Such an empty head and the way she answers, we can understand what she has done. #LokSabhaElection2019"

Not even in one interview she was able to tell the things she has done for her constituency. Such an empty head and the way she answers we can understand what she has done.#LokSabhaElection2019 pic.twitter.com/4m0iSWxU1O

Soon enough, Malini responded to the trolls. She can be seen crying, wiping away her tears and sipping on some water before the interview with NDTV. “I am an actress, I am a celebrity. I would not get such an environment in Mumbai. When I go from village to village, I get to see this. It feels very good. So if I went to the farm and harvested the crops, even if it was an act, I really liked it. I enjoyed it, so what’s objectionable in that?”

WATCH | Hema Malini, BJP candidate from Mathura, responds to opposition's criticism over photos of her working in a farm during campaign


Users further questioned the work she was doing as a politician after people came to know of the jump in overall assets of the actor. “RTI [Right to information petition] revealed that Hema Malini got INR700 million worth of land for INR175, 000. This is why people join politics in India - to grab wealth and do no work. These are public servants. Citizens have the power to fire them and clean the government. Protest loudly.”

This is why people join politics in India, to grab wealth and do no work. These are public servants. Citizens have the power to fire them and clean government. Protest loudly.

Bunny Rabbit | 2 years ago | Reply She's still very pretty at 75 . She should stick to acting and not go into politics . Its not easy to win votes and govern intelligent public .
Replying to X
Saved ! Your comment will be displayed after the approval.
Error !
Error! Invalid Email.