Warns Beijin­g it will be diffic­ult to allow trade to contin­ue withou­t a pact
By Reuters
Published: April 5, 2019
Tweet Email 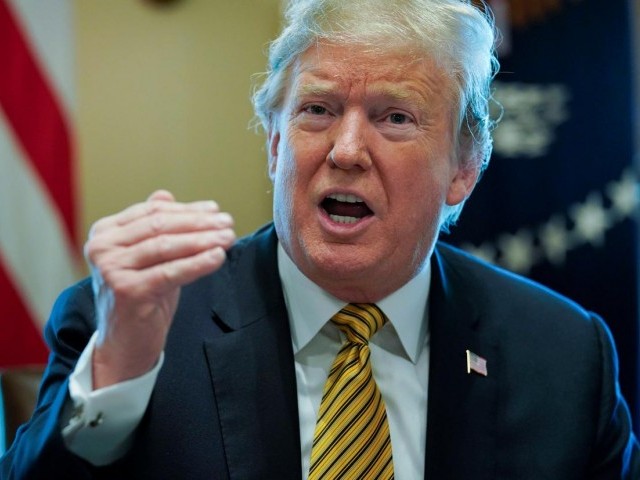 Warns Beijing it will be difficult to allow trade to continue without a pact. PHOTO: REUTERS

WASHINGTON: US President Donald Trump said on Thursday the United States and China were close to a trade deal that could be announced within four weeks, while warning Beijing that it would be difficult to allow trade to continue without a pact.

The two countries are engaged in intense negotiations to end months-long trade war that has rattled global markets, but hopes of a resolution soared after both sides expressed optimism following talks in Beijing last week.

Speaking to reporters at the White House at the start of a meeting with Chinese Vice Premier Liu He, Trump said some of the tougher points of a deal had been agreed but there were still differences to be bridged.

“We’re getting very close to making a deal. That doesn’t mean a deal is made, because it’s not, but we’re certainly getting a lot closer,” Trump said in the Oval Office. “And I would think with, oh, within the next four weeks or maybe less, maybe more, whatever it takes, something very monumental could be announced.”

Trump said he would hold a summit with Chinese President Xi Jinping if there were a deal. Xi assured Trump that text of the China-US trade could be finalised soon, in a message conveyed by Liu He.

According to state-run news agency Xinhua, Liu He told Trump that Xi believed under his and Trump’s leadership, China-US relations will make new and greater progress.

Xi said that in the past month or more, the two sides’ trade teams had maintained close contact and “achieved new and substantive progress on issues in the text of two countries’ trade agreement”.

“I hope the two sides’ trade teams can continue working in the spirit of mutual respect, equality and mutual benefit to resolve each other’s concerns, and finish negotiations on the text of the China-US trade agreement soon,” Xi said to Trump through Liu.

Trump declined to say what would happen to US tariffs on $250 billion worth of goods as part of a deal. China wants the tariffs lifted, while US officials are wary of giving up that leverage, at least for now.

US and China seek deal to prevent trade-war escalation

Asked about the benefits of an agreement for China, Trump said “It’s going to be great for China, in that China will continue to trade with the United States. I mean, otherwise, it would be very tough for us to allow that to happen.”

Goods trade between the United States and China, the world’s two largest economies, totaled $660 billion last year, according to US Census Bureau data, consisting of imports of $540 billion from China and $120 billion in exports to China.

On China’s behalf, Liu cited “great progress” in the talks because of Trump’s direct involvement and expressed hope that the talks would lead to “a good result.”