In Aleppo, the fate of a legendary hotel hangs in balance

In Aleppo, the fate of a legendary hotel hangs in balance

The Baron Hotel was once the fancie­st in Aleppo, Syria's second city, visite­d by a long list of celebr­ated names
By AFP
Published: April 5, 2019
Tweet Email 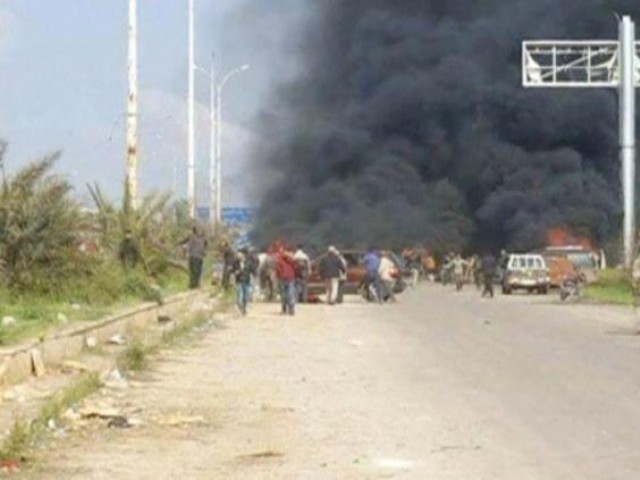 Still image shows a cloud of black smoke rising from vehicles in the distance in what is said to be Aleppo's outskirts, Syria April 15, 2017. PHOTO: REUTERS

ALEPPO: For generations her husband’s family managed the iconic Baron Hotel in northern Syria, but after years of war the inn is empty and Rubina Mazloumian says she is too tired to carry on.
The Baron Hotel was once the fanciest in Aleppo, Syria’s second city, visited by a long list of celebrated names.
But after four years of civil war in the former rebel stronghold, its suites and ballroom are empty, walls peeling — and its long, red carpet is gone.
The bar stools are vacant and its piano sits unplayed, collecting dust.
All 48 rooms are closed, barring one.
“I don’t know what we’re going to do with this place,” said Mazloumian, the 65-year-old widow of the hotel’s heir, and its current manager.
“It can no longer receive guests or friends,” said the hotel’s only resident.
“The only people that remain in the hotel are two employees, me and this dog,” she added, gesturing to a small pet with a curly brown coat playing nearby.
The hotel was founded in 1911 by the grandfather of Mazloumian’s husband, Armen Mazloumian, who died in 2016.
Carrying a set of keys, Mazloumian strolled through the entrance of the hotel and pointed towards a sweeping staircase.

Symbol of peculiarity: Meet the ‘yellow man’ of Aleppo
“We used to roll a red carpet on these stairs when we received prominent leaders like king Faisal I (of Iraq and Syria) and Egyptian president Gamal Abdel Nasser,” she said.
She trudged up the stairs and stood in front of a closed wooden door.
Room 203 is where famous novelist Agatha Christie stayed, she said. Inside the hotel, she wrote parts of “Murder on the Orient Express”.
Mazloumian said the Baron Hotel is a testament to decades of Syrian history. 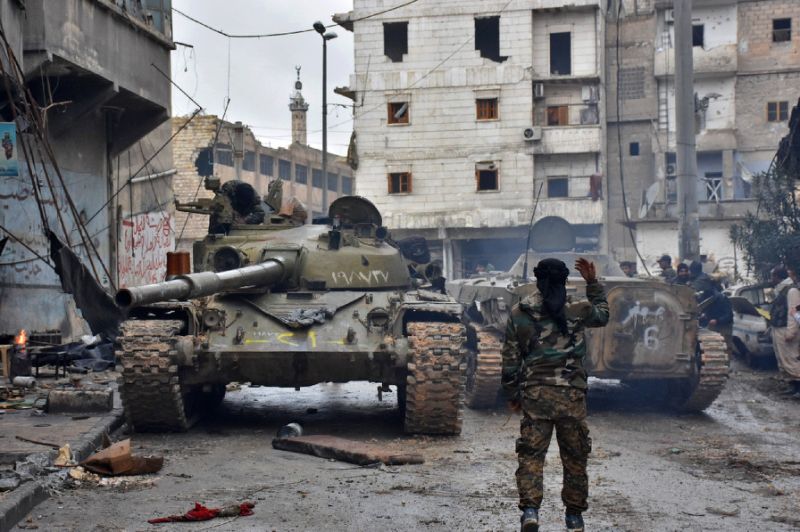 A member of the Syrian pro-government forces gestures to tanks as they patrol the northern embattled city of Aleppo on December 14, 2016. PHOTO: AFP

It is from here that king Faisal delivered a speech proclaiming Syrian independence from the Ottoman Empire in 1918.
The street housing it, formerly named after French general Henri Gouraud, was retitled “Baron Street” after French forces withdrew from the country in 1946.
Nasser delivered a speech from one of its balconies in 1958, the year Egypt and Syria formed the ill-fated United Arab Republic.
Other famous people also graced its rooms — US billionaire David Rockefeller, France’s wartime leader and later president Charles de Gaulle and American aviator Charles Lindbergh.
On her tour of the building, Mazloumian paused beside a disused wooden piano.

Around 100 Syrians struggle to breathe after ‘toxic’ attack

“It used to be a place full of raucous laughter, clinking glasses, and music — classical and from all over,” she said.
“Historical events were written here.”
But “today, this place is slowly becoming a piece of history itself.”
The contemporary history of the Baron Hotel is less glamorous and tells of the fate of Aleppo, which lies largely in ruins almost two years after battles ended.
The establishment was forced to close down in 2012 when the city became a main front in the war between the Syrian government and rebels battling President Bashar al-Assad’s regime.
The hotel was just a few metres (yards) from the front line.
Like much of the surrounding city, its walls are scarred with bullet holes and the power rarely comes on.
Militants advance against opposition forces in northern Syria: monitor

In 2014, when pitched battles in Aleppo sparked a wave of displacement, the hotel was taken over as a makeshift shelter.
It was the second time it was a refuge for the displaced, after hosting hundreds of Armenians who fled their homes during the mass murder perpetrated by the Ottomans in 1915.
The regime retook control of the city in late 2016, after a deadly offensive and a deal that saw tens of thousands forced to leave its once opposition-held east.
But this time around, recovery is unlikely, said Mazloumian, lamenting the hotel’s lost splendour.
“Only three wine glasses and six coffee cups remain in the hotel today,” she said, standing beside a polished bar, a few plates scattered on its countertop.

“A lot of things have been stolen,” she added.
When asked whether she would sell the hotel, Mazloumian hesitated, then replied cautiously.
“I’m an old woman,” said the manager, who co-owns the hotel with other relatives abroad.
“I don’t have it in me to continue running this hotel,” she added.
“I think it’s only natural for it to come under new hands.”

India fights to save its heritage havelis in the desert