Despit­e its grueso­me nature, the topic remain­s a taboo and people remain in a deep state of denial about it
By Sarah B Haider / Design: Ibrahim Yahya
Published: April 4, 2019
Tweet Email

KARACHI: There is no doubt in believing that child sexual abuse is one of the most unsettling phenomena in this world. Children are victimised across the globe, but when it comes to Pakistan, the subject is often brushed under the rug because of its taboo nature.

Everyone knows about it, but people still prefer to remain in a deep state of denial about it – unless the news of the brutal rape and murder of six-year-old girls makes headlines across the country and it suddenly shakes the conscience of the entire nation.

Despite the hue and cry that erupted on Pakistani social media to bring six-year-old Zainab Ansari’s rapist to justice, there has, sadly, been an increase in the number of reported cases of sexual abuse against children.

Sahil – an NGO working for the protection of children from violence – recently released its 2018 annual report which revealed some dreadful figures related to violence against children.

The data revealed that out of the total cases of child abuse, 55% victims were girls and 45% were boys. The age bracket when children are most susceptible to abuse, however, varied between girls and boys.

According to the report, boys in the age brackets of six to ten and 11 to 15 years were more vulnerable to child sexual abuse as compared to their female counterparts. On the other hand, girls in the age brackets of zero to five years and 16 to 18 years were at a higher risk of being targeted by sexual predators. The report also made the shocking revelation that in a day, more than 10 children became victims of abuse now throughout the year. 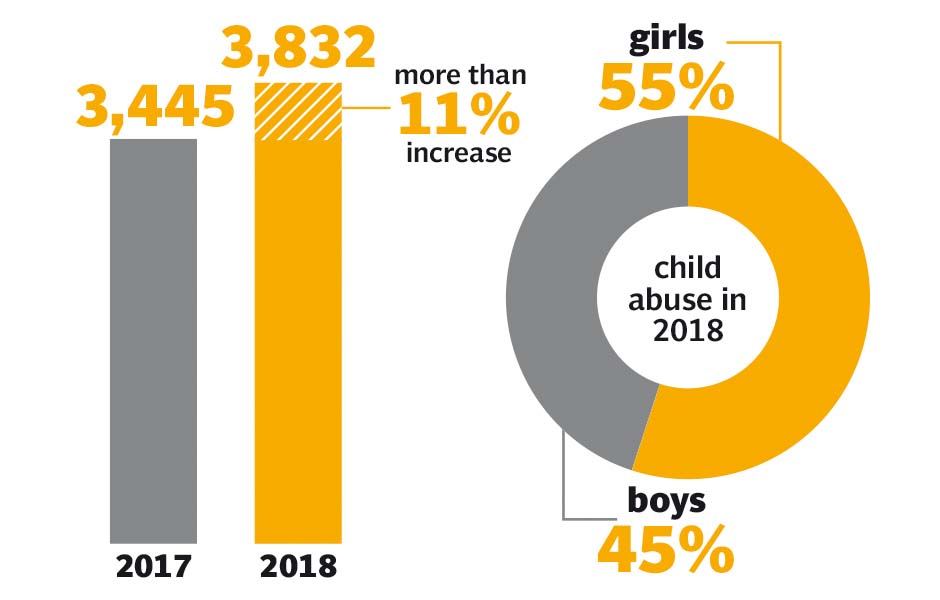 This shows the gravity of the situation and stresses the need for primary caregivers and parents to be more vigilant of their children’s whereabouts and activities – both within and outside of the house.

The report also mentioned the categories of abusers, mainly comprising acquaintances of the victims’ families, who were reportedly responsible for 1,787 cases out of the total of 3,832. Similarly, as compared to 2017, there was also an increase in the number of incidents perpetrated by neighbours (133%), relatives (62 %) and clerics (78%). In 2018, 57 children were abused by teachers as compared to 17 cases in 2017.

The report also talked about the major categories of crimes in the reported cases in 2018 and showed that there were 923 cases of abduction, 452 cases of missing children, 537 cases of rape and 589 cases of sodomy, 345 cases of attempted rape, 282 cases of gang sodomy, 150 cases of gang rape and 130 cases of child marriages.

Speaking on the matter, Afroze Salim, a psychologist from Therapy Works said that child sexual abuse is a common yet neglected issue in society and there needs to be more awareness about it.

“[Considering the increase in reported cases of sexual abuse against children], it is necessary to create awareness among children and provide them with a support system wherein they can confide in their parents,” she said.

Despite being a taboo topic, children must be taught about good and bad touch and should never be shamed if they are subjected to sexual abuse.

“When children are unable to speak to their parents or primary caregivers about their sexually-abusive experiences, they develop behavioural disorders in later stages of life, including patterns leading to drug addiction, isolation, and mood and personality disorders,” she said.

It is, therefore, very important to create mass awareness about this heinous crime so that incidents can be reduced, if not completely eradicated.

“Parents should remember that if a child opens up about sexual abuse, they should never be shamed, otherwise – when they grow up – they will develop trust issues and will not be able to take responsibility for their bad behaviours out of the fear of abandonment,” Salim concluded.