Malaysia ex-PM Najib to go on trial for corruption

Najib will face seven charges of corruption and money laundering over the alleged theft of some $10.3 million 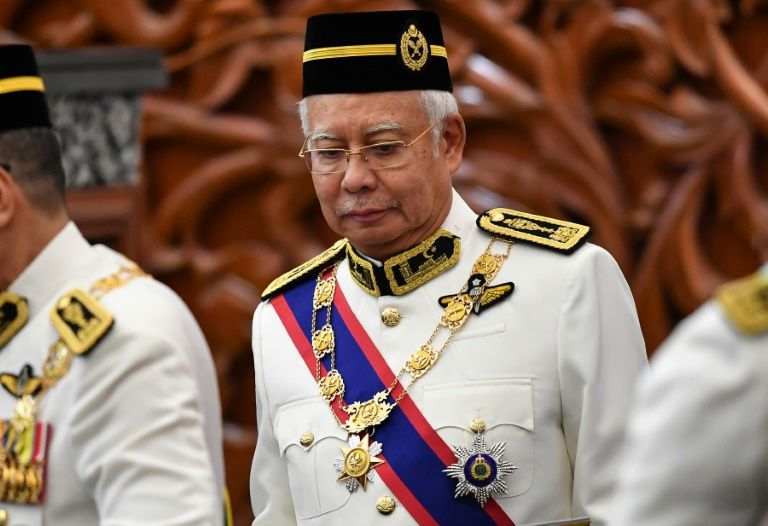 Malaysia's disgraced former leader Najib Razak will go on trial Wednesday over a multi-billion-dollar financial scandal that contributed to his long-ruling coalition's downfall last year and sent shockwaves around the world.

The 65-year-old will face the first of several trials over his alleged involvement in the looting of sovereign wealth fund 1MDB, a state investment vehicle established to develop the economy of the Southeast Asian nation.

The former premier and his cronies are accused of plundering billions of dollars from the fund and spending it on everything from high-end real estate to artworks in a fraud that stretched around the world.

He had been tipped to win another term in office easily last year and extend his coalition's six-decade stranglehold on power, only to be soundly defeated by his former boss, Mahathir Mohamad, who rode a wave of public anger to the premiership.

In the months that followed, once-dormant investigations into 1MDB were relaunched and Najib was hit with dozens of corruption charges linked to the scandal.

In Wednesday's trial, due to start at 0600 GMT, Najib will face seven charges of corruption and money laundering over the alleged theft of some $10.3 million from SRC International, a former 1MDB unit.

It is only a fraction of the money allegedly stolen from 1MDB, and hundreds of millions of dollars are believed to have ended up in Najib's accounts alone.

He has denied any wrongdoing.

Najib was initially due to stand trial in February, but appeals by his defence team over procedural matters saw his case put on hold until a judge last week ruled the trial should finally proceed.

While many of his cohorts have been caught and charged in Malaysian courts, the alleged mastermind behind the 1MDB scandal, playboy financier Jho Low, is still at large.

Local media reported the former premier made a bid on Monday to delay his trial yet again, although this failed.

Cynthia Gabriel, head of the non-profit group The Centre to Combat Corruption and Cronyism, told AFP that Malaysians had been waiting "too long" for the trial to begin.

"The multiple delays are so obvious and deliberate, it's a way of pushing the trials further," she said. "It's apparent that the former ousted PM, isn't quite ready to sit in the dock and face trial, be cross-examined, and get embarrassed."

Fahmi Reza, a graphic artist who was slapped with a jail term and fined for depicting Najib in a caricature as a sinister clown, said it was the ex-premier's turn to "face justice".

"Today, it is your turn to be dragged here to face justice for the crime of corruption and abuse of power during your reign," he said in a tweet.

Najib's former mentor turned nemesis Mahathir, now 93 and in his second stint in office, has pledged to bring him to justice and bring back the huge sums of cash stolen from 1MDB.

The US Department of Justice, which is investigating the controversy as money was allegedly laundered through the US financial system, believes $4.5 billion in total was looted from 1MDB.

Malaysia has also charged Wall Street titan Goldman Sachs over the scandal, alleging the bank and its former employees stole billions of dollars from 1MDB.

Goldman units and two ex-bankers are accused of misappropriating $2.7 billion, bribing officials and giving false statements in relation to bond issues they arranged for the fund. The bank has vowed to fight the charges.