As part of a drive to be more transp­arent and offer greate­r contro­l to users
By Reuters
Published: April 2, 2019
Tweet Email 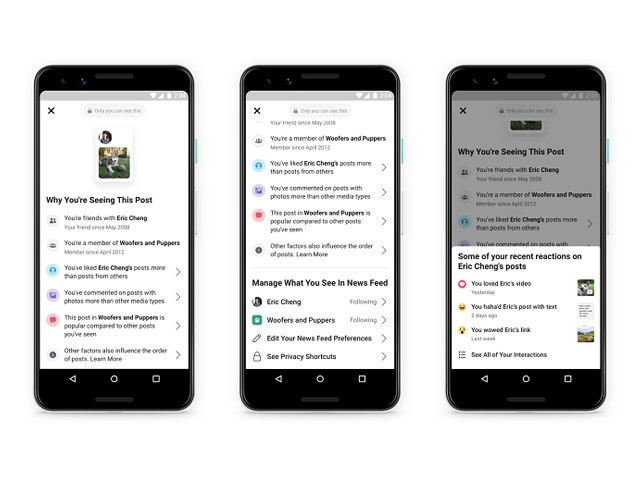 Facebook is lifting the lid on the algorithm that decides which posts appear in its news feed, as part of a drive to be more transparent and offer greater control to users. PHOTO: FACEBOOK

LONDON: Facebook is lifting the lid on the algorithm that decides which posts appear in its news feed, as part of a drive to be more transparent and offer greater control to users.

The feature “Why am I seeing this post?”, being rolled out from Monday offers some insight into the tens of thousands of inputs used by the social network to rank stories, photos and video in the news feed, the foundation of the platform.

“The basic thing that this tool does is let people see why they are seeing a particular post in their news feed, and it helps them access the actions they might want to take if they want to change that,” Facebook’s Head of News Feed John Hegeman told reporters on Monday.

After a series of privacy scandals, Facebook needs to regain users’ trust as it prepares to roll out a single messaging service combining Facebook messenger, WhatsApp and Instagram that could make it even more central to users’ communications.

The new news feed feature will show users the data that connect them to a particular type of post, Hegeman said, for example, that they are friends with the poster and they’ve liked their posts more than others, they’ve frequently commented on that type of post before, or that the post is popular with users with the same interests.

It will detail some of the interactions that lead the algorithm to reach its conclusion, he said, although it will not show all of the thousands of inputs that influence the decision.

“We’ve tried to really focus on the signals that are most important and play the biggest role in what causes people to see a post or not,” Hegeman said.

Facebook developed the new tool with research groups in New York, Denver, Paris and Berlin, he said, and as a result of feedback, Facebook has made it easy for users to access tools to control what is in the news feed themselves.

Facebook is also updating its “Why Am I Seeing this Ad?” feature launched a few years ago with additional details, Hegeman said, such as explaining how ads work that target customers using email lists.

The company shifted its strategy for its centrepiece news feed in early 2018 when it decided to prioritise posts from family and friends and downgrade non-advertising content from publishers and brands.